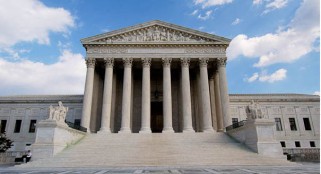 And what of the Supreme Court

With the death of Antonin Scalia, the battle for control of the precarious ideological makeup of the court went into full gear.

Republicans blocked Merrick Garland’s nomination from consideration, they’ll probably regret that unless Hillary’s FBI probe, pay-for-play scandals, or another Assange email leak do her in in the before the 8th.

The election’s battle over who gets to fill it and any other vacancies are strong incentives to various parties to sign off on the fragile (and sometimes bizarre) coalitions backing their candidate.

That will partially resolve on Nov. 8 (assuming there isn’t an Electoral College blow up), and that appointees toe the ideological line of the President and coalition who put them there. Historically, that’s hardly been a given.

The divided electorate isn’t likely to be pleased with whomever fills that seat, and the rulings which come down in the next few sessions seem unlikely to be calming.