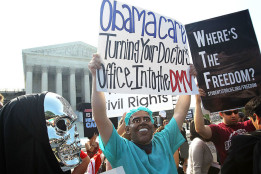 Rates continue to rise and the law isn’t fully enabled. People’s plans are getting canceled, they can’t use the providers they want, their deductibles are going sky high. The supporters are starting to get that the economics won’t drive the young and healthy to sign up until they get sick, even as the penalties have to be raised to compensate for the rising rates.

The major players continue to consolidate and abandon markets where they can’t compete.

The Pharmaceutical regulatory apparatus in place cannot keep up with the pace of science discovery; the monopoly pricing FDA grants to new entrants creates outrage at the lack of price sanity. Will we see price controls next, in spite of their unambiguous counter productivity?

But the political capital expended to pass the Affordable Care Act led to the populist recoil and downfall of those who drove it through. Do we have the stomach for round 2, given the state of american politics?

NEXT: And what of the Supreme Court