The Scandals are unresolved. Our Long National Nightmare is Just Beginning 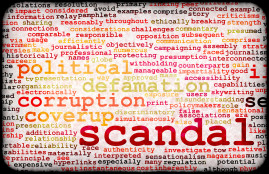 Wikileaks revelations, the VERITAS action findings, Hillary’s email scandal, and Trump’s sexual assault allegations, and everyone’s questionable conflicts of interest allegations will still be out there.

There will be screaming for investigations, prosecutions and televised congressional inquiries — perhaps even convictions. Of course, the machinery will do their damnedest to squash, which in itself could spawn new corruption outrage at press insiders being in the pockets of the major parties.

The massive amount of data hasn’t yet been completely digested, and even defenders and apologists are finding out their candidate has way too much smoke for there not to be some fire. Recall that Nixon was elected in a landslide in 1972 even after the news of Watergate break-in. Nixon’s political woes were just starting.

Both candidates have made countless enemies in these messes. There will be no shortage of ammunition for the pundits to accuse and for the candidate loyal apologists to try and spin.

The public is tired of it, but our long national nightmare is just beginning.

NEXT: The Age of Information Ubiquity