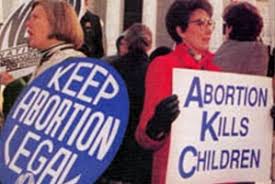 New York's legislative assembly cheered as the vote was announced on a controversial abortion rights bill.

In the 15th and 16th centuries, European explorers “discovered” the Americas, seeking fortunes for themselves and their benefactors.  The resulting “colonization” of the Caribbean islands led to hundreds of thousands of indigenous people being murdered, starved to death, or enslaved to work the plantations claimed as their own by the invaders, and supported by their business partners back on the continent.

These people were forced to give up their way of life by the superior fire power and will of the “colonists,” forced to work for free to produce crops or work in mines digging for precious metals.  They were separated from their families, either by death or by seeing their loved ones shipped to foreign lands as slaves.

Back in Europe, untold riches in goods and commodities were being received with little or no thought to the plight of those innocent victims.

In the 17th, 18th and 19th centuries, American land owners, businessmen, and politicians forged their way westward across what is now The United States, claiming land that was once roamed by various Native American tribes.  Breaking promise after promise, the westward expansion left in its wake the bodies of these natives strewn across the prairies.  Some were starved, some, including women, children and the elderly, were outright massacred, and their homes and food sources were destroyed.

Back in the East, the exploits of the soldiers and other individual “Indian fighters” were heralded in the pages of newspapers and dime novels, with little to no thought to the plight of these innocent victims.

In the 20th century, Adolph Hitler rose to power in Germany, with his Nazi Party and his promises to build a “Master Race,” complete with and pledges to eradicate the weak, infirm and inferior among them.  In the 1930s, Hitler established the first concentration camps.  Those who were opposed to Hitler’s reign were imprisoned, exiled, or killed.  Jews, deemed to be an inferior race, were sent to these camps to be subjected to grisly experiments and eventually slaughtered.

But while the world was caught in the grip of the Great Depression, the Nazi Party, with Hitler at the helm, began to restore economic stability to Germany, partially by building an impressive military machine.

The German people began to enjoy the fruits of the burgeoning economy, giving little to no thought to the innocent victims.

This year, the New York State Assembly passed a bill that changed their existing law from prohibiting an abortion after 24 weeks of pregnancy, allowing the practice when the mother’s life or health is at risk.  The previous wording only listed the mother’s life as a factor.

Advocates claim it simply enforces a woman’s right to have a safe, legal abortion, and is necessary, should Roe v. Wade be overturned, to codify those rights in New York state.

Critics argue it expands abortion into the third trimester, allowing a decision to be made up until the time of birth, and allows for other than licensed physicians to perform abortions.  They worry a broad interpretation of the “health” statement could include emotional, economic and social health as well, and could lead to 8th and 9th month abortions of healthy babies.

The New York State Assembly voted 92-47 to pass the bill, and Gov. Andrew Cuomo signed the bill, giving little to no thought to the innocent victims.