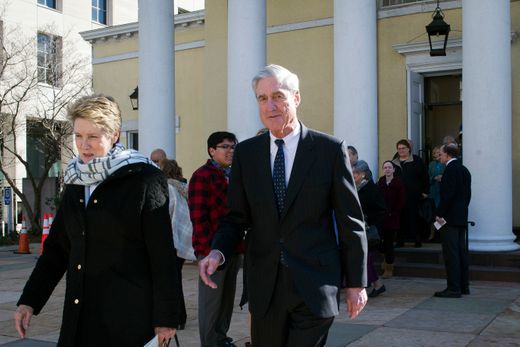 The much-anticipated Mueller Report has been released, but that's not the end of it. Photo Credit: Cliff Owen, AP

It was just like one of those pictures you see on social media.  You know, the ones where at first glance, some people see and elderly lady with her hair in a bun facing the right, and others see a young maiden wearing a scarf facing the left.  After you study it a while, you can see the other view just as plainly as you did the first and you wonder why you didn’t see it.

The newly released Mueller Report is sort of the same way.  If you were a Trump supporter, you immediately saw vindication and exoneration of President Trump of all charges of collusion with the Russians to impact the outcome of the 2016 Presidential election.

On the other hand, if you were a Never-Trumper, you see the President simply got away with the crime because he covered his tracks so well, and the report doesn’t even begin to exonerate Trump. On the contrary, it details his actions that prove, at least circumstantially, he is guilty as charged.

The truth, if there is a truth anymore, lies somewhere in between.

Personally, I don’t believe Trump is politically savvy enough to orchestrate such a collusion and keep it from the prying eyes of a hostile press, let alone a special counsel investigation.  While he may have done some things that do not appear to be morally and ethically correct, I would suggest that any politician, novice or sage veteran, could not undergo the type scrutiny Trump has faced without some blemishes being discovered.

The Muller investigation, despite dozens of witnesses, hundreds of subpoenas, and thousands of questions being asked, failed to uncover any hard evidence that Trump, or any other American citizen conspired or colluded with Russian agents or governmental officials to influence the election.

Pair that with the full investigative power of supposed fair and balanced journalists on the right and left that were unable to produce any factual evidence to support the charges in over two years, and it would seem to any reasonable person that the evidence did not exist.

Note I didn’t say the act wasn’t committed.  I don’t know, and neither do any of the politicians or the press who have been saying they are certain the charges are true for some 26 months.  Even those who have been promising to reveal the evidence they had in their possession, that Mueller and his team could not find, have never released it to the public.

It would be too much to ask that those who have been so overly concerned about the sanctity and legitimacy of our election process to be overjoyed and relieved to find out the process was safe.  But the same pols and pundits that have shouted “collusion” from the rooftops and headlines, even before the release of the report pivoted to obstruction of justice as the new mantra.

The same ones who call Trump a racist, homophobe, and compare him to Hitler, could care less about the election process.  Their end game was the removal of Trump, or any other Republican, from office, to regain power in the US political arena, and advance their own issues, with or without the will of the American electorate.

They, and the press that supports them, have been exposed to be much worse than the current President they hold in contempt, that they are willing to do anything and everything to control the government, no holds barred.

I would ask my left-leaning friends to take Trump from the equation for just a moment, pretend for a minute that someone else is in the White House.  Would the actions of the press and the Democrats for the last two years be the way you would like to see politics conducted in America?  Would this be the example we would like the rest of the world to see?