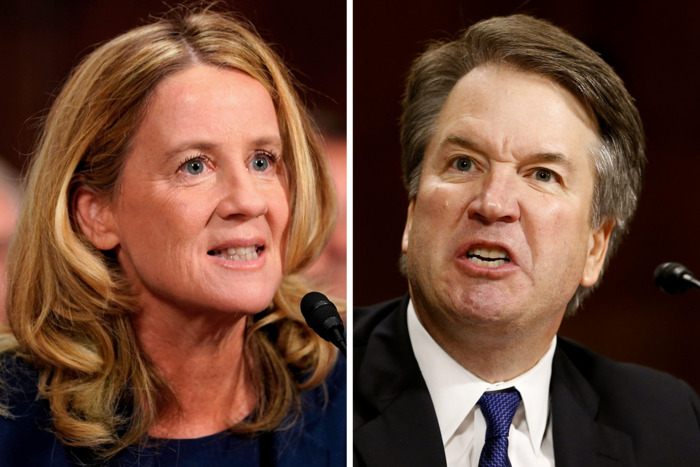 Seems both sides are claiming a win in the Ford/Kavanaugh hearing. Photo Credit: Getty Images

As a great many concerned Americans did, I found myself riveted to the TV watching the Senate Judiciary Committee hearings on the allegations of sexual misconduct by Dr. Christine Blasey Ford against President Trump’s Supreme Court Justice nominee, Brett Kavanaugh.

Based on news reports and social media posts since the hearing adjourned, I would have to say few minds were changed by the proceedings.  The Left heard what they wanted to hear, and the Right did the same.  In truth, the hearing itself was quite the waste or time, because absolutely no new or damning evidence was presented by either side.  Everything we heard, we had heard before.

But, there are a few points to ponder after watching the event unfold.

One, while I found Dr. Ford’s testimony to be emotional and compelling, I have to stop short of calling it credible.  She recounted a horrific incident in her life, but the story has far too many holes to be considered as credible as she told it.  I would imagine no prosecutor, without an ideological agenda, would attempt to charge Judge Kavanaugh with the crime of sexual assault based on the evidence provided by Dr. Ford.

One of the big takeaways I can’t get past is the fact she escaped from her would-be rapists but left her life-long best friend with them, somehow found a way to get home, but never mentioned the incident to her best friend, nor did her best friend ever ask her why she abandoned her at that house.  I wish someone would have asked that question, even though her best friend has already said in a sworn statement she has no recollection of the event.

Two, while I believe Dr. Ford believes she experienced the event she so meticulously recounted or a very similar experience, I believe she is mistaken about Judge Kavanaugh being involved.  Dr. Ford first told Senator Dianne Feinstein about the allegation in July of this year.  It is inconceivable to me that she did not share the allegation with fellow Democrats who also wish to block Kavanaugh’s appointment, which means the Democrats have most likely been looking for supporting evidence since that time.

Once her letter was leaked to the Washington Post, a small army of left-leaning reporters and liberal Democrats have been scouring all traces of Kavanaugh’s life to find the smoking gun that would derail the nomination.  As evidenced in the hearing yesterday, all they have been able to uncover is a yearbook post and an affinity for beer-drinking.  In other words, they have found nothing.

Absence of evidence does not prove innocence, but evidence is needed to establish guilt.  I doubt the FBI could conduct a more thorough investigation than what has been going on over the last two weeks.

Three, the Democrats may want to soften their calls for an FBI investigation of the allegations and the events leading up to the hearing.  Some potentially embarrassing, if not illegal or unethical, revelations came out of the testimonies given under oath.  Of course, that would depend upon whether or not we could have a non-partisan investigation from any federal agency.

Senator Feinstein had ample opportunities to question Kavanaugh about Dr. Ford’s allegations and maintain her anonymity before the leak of her letter of July 30.  She chose not to, even in private meetings with the nominee.  I can see no other reason for her activities other than she knew the allegations were shaky at best and planned to use them as an 11th hour stall tactic.  I don’t buy her protecting the witness story.

There also may be ethics questions about who leaked the letter, the advice given to Dr. Ford about seeking counsel, and who is paying for her polygraph test and other expenses.

I feel for Dr. Ford, not only because she was most likely assaulted as a young woman, but also because she was used to further a political agenda by those from whom she sought help later in life.  I’m not sure which is the greater crime.

Still, punitive actions against anyone based on uncorroborated allegations, Republican or Democrat, or no matter how strongly you want to believe them, is not the way we want American government to work.  America is better than this.