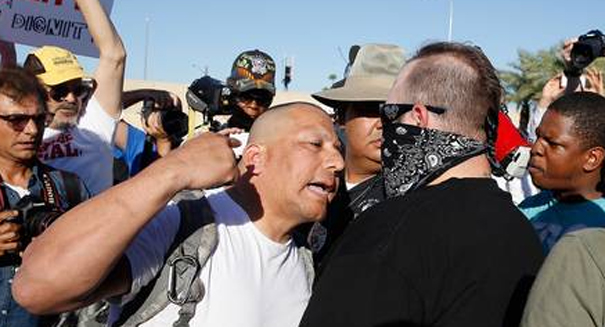 It's easy to find a reason to hate, but when we hate, we become the same as those who hate us.

The events that transpired in Charlottesville, VA, this past weekend are despicable and disgusting, but are not exactly new to the scene in the United States today.  We have seen similar events play out in cities across the nation over and over again.  That doesn’t make them any less deplorable, but given the circumstances under which they occurred, they were not all that surprising.

Hate groups exist in America, as well as the rest of the world.  America is bit of an exception, in that in our country, we allow freedom of expression more liberally that do most nations of the world.  Or at least we have in the past.

Case in point.  There are any number of groups and individuals that freely admit that they hate President Donald Trump.  They make no attempt to hide their hatred for the President, and no one, well almost no one, calls them out for it.

But those hate groups are wrong, you counter.  Of course, they are; but they believe they are just as right as do you and I for believing the opposite, and they believe we are just as wrong for not supporting their views.

So, when we hate those who hate, we become just as those who hate.  We become what we hold in contempt, for hate is not justifiable.  When we succumb to our own hatred, we are no different from those whom we hate.

Back to the President.  Those of us who hurl insults and threats at Trump, his associates and even his family members because Trump insults us, are on the same level as Trump himself. But blind hatred for him and his office prevents us from seeing what we have become.

But Trump is wrong!  Maybe he is; but who among us has never been wrong or on the opposite side of a discussion or argument?  If we blindly hate those with whom we can’t see eye to eye, we will soon be a small group of perfect humans indeed.

Take all that energy and force wasted in hating and put it to constructive use.  If you don’t like the way things are, don’t take to fighting in the streets and make them worse, work together to reach a common ground to make things better than they were.

Engage in civil conversations instead of shouting down controversial speakers.  Ask pointed questions and listen to the answers.  Try to understand why that person feel as they do, instead of trying to silence them.  Then take the podium yourself and express the opposite view.  Treat each other with respect, even to the point of turning the other cheek on occasion.

No one Is right all the time, but the truth usually comes to the top.  You may find that the position of issue for which you are so passionate can be resolved in a way that both sides can feel good about.

Hatred is never justified.  But it is addictive, and it spreads like wildfire, destroying everything in its path.  Families, friends, co-workers, alt-right and Antifa.  It’s easy to hate.  It’s much more difficult to work together, but the results are so much more desirable.