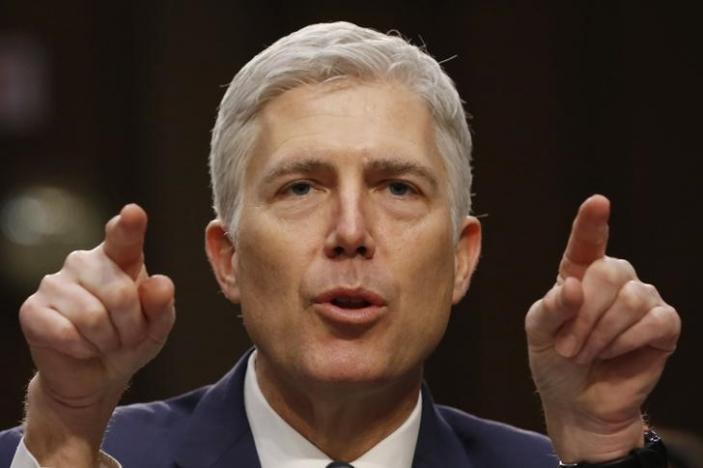 There appears to be little chance that Senate Democrats and Republicans will agree to a formula that will allow the full body to vote on the nomination of Judge Neil Gorsuch to the US Supreme Court.  Under current Senate rules, Democrats can block Gorsuch’s nomination by mustering just 41 votes, denying Republicans the 60-vote super-majority needed to prevent a Democratic filibuster.

Currently, there are 48 Democratic Senators.  That means a straight party-line vote would appear to doom Gorsuch’s chances.  But there’s a hitch.

Four years ago, then-Senate majority leader Harry Reid was so disgusted with efforts by the GOP to block the Democrats’ legislative agenda that he orchestrated a parliamentary maneuver that shocked many in the Senate on both sides of the aisle.  He unilaterally changed the Senate rules for confirming cabinet appointees and federal judicial nominees.

The filibuster-proof 60-vote super-majority rule was abandoned.  In the future, it would only take a simple 51-vote majority to confirm cabinet officers and judges.  It was called the “nuclear option” because it “blew away” opposition in a single bold stroke.

Democrats, of course, never expected to lose the Senate, much less the White House.  And they also set a boundary to the nuclear option:  They would not apply it to Supreme Court nominees.

Now, Republicans are threatening to do just that.

A few weeks ago, it looked like this battle might be avoided.   A number of Democrats – about eight — had strongly intimated that they would be willing to work with Republicans to confirm Gorsuch.  With one condition:  They wanted the GOP to forswear use of the nuclear option in the future.

But that was before Trump and the GOP failed so miserably to “repeal and replace” Obamacare.  Sensing Republican disarray, some top Democrats now want to block a deal with the GOP on Gorsusch.  They think it’s better to force the GOP to institute the nuclear option to get Gorsuch confirmed because mainstream voters will be appalled.  Or faced with an angry filibuster, the GOP might feel compelled to back down.

It’s a huge risk – and an unwise one.  What’s more likely to happen is that the GOP will get Gorsuch confirmed anyway and voters will punish the Democrats. That’s because 10 key Democratic Senate seats are up for grabs in 2018 – in states where Trump beat Clinton by a large margin.  Democratic intransigence over Gorsuch — whose confirmation is favored by a plurality of voters, according to polls — could well doom their candidates in these races and deliver a filibuster-proof majority to the GOP.

But Democrats are also under enormous pressure from their base to oppose Trump at every turn, and Senate minority leader Chuck Schumer (D-NY), who feels humiliated that his close friend Hillary Clinton lost the presidency to the billionaire real estate mogul, is spoiling for a fight.  So the Democrats may just decide to dig their heels in on Gorsuch, hoping that luck – of which they’ve had little of late – will somehow turn their way.

Of course Democrats are also still sore – and perhaps rightly so – that the GOP refused to confirm their own choice to replace the deceased Antonin Scalia — Justice Merrick Garland — while President Obama was still in office.  In a tit-for-tat world, they feel have every right to hold up Gorsuch.  It’s simply turnabout fair-play.

But it’s also destructive play.  And it fits a pattern of Democratic rule-twisting that dates to the fateful 2010 decision to pass Obamacare with just 51 votes – in that case, using an arcane application of the “budget reconciliation” process.  Then, too, Democrats were warned that setting a precedent – actually both parties had done it previously but neither for a while – would undermine the “checks and balances” that prevent one party from manipulating the legislative process to try to dominate national politics unilaterally.

Democrats ignored that advice, of course, and Obamacare passed.  But like Reid’s passage of the “nuclear” option, it’s come back to haunt them. Despite the GOP’s recent failure, at some point, Republicans will return to the Congress with a “repeal and replace” bill  of some kind and like Obamacare in 2010, it will pass with a less than 60-vote majority.

The biggest loser in this to-and-fro process isn’t the Democrats or the Republicans.  It’s the American system of government – and the voters, who mostly want their Congress to govern, and yes, to compromise, and to not insist on partisan paybacks every time they lose a big vote.

Obama was elected with the promise that he would transcend partisanship — but for a variety of reasons, he quickly succumbed to pressures to line up with his party.  Trump, who is a Republican in name openly, also has ambitions of governing somewhat closer to the center.  To his credit he did just resist pressures from House GOP conservatives to embrace their draconian alternative to Obamacare — but in the end, to no avail.

The Gorsuch fight may be the last chance for Congress to demonstrate that it is capable of reversing the terrible tide of extreme partisanship that has plagued the country for nearly a decade.  It won’t be easy, with so many of the Senate’s moderate bridge-builders long retired.  John McCain, the Navy war veteran and one-time POW, remains in the Senate.  He’d like to forge a last-minute agreement on Gorsuch. The Congress badly needs his heroism.  But right now he must feel — again — like a prisoner of war.

Where will it end?  Assuming the GOP applies the nuclear option to Supreme court nominees, it’s only a matter of time before the same slim 51-vote majority standard is applied to routine pieces of legislation that are currently subject to filibuster and a veto threat.   Once that happens, the two parties might as well declare civil war.