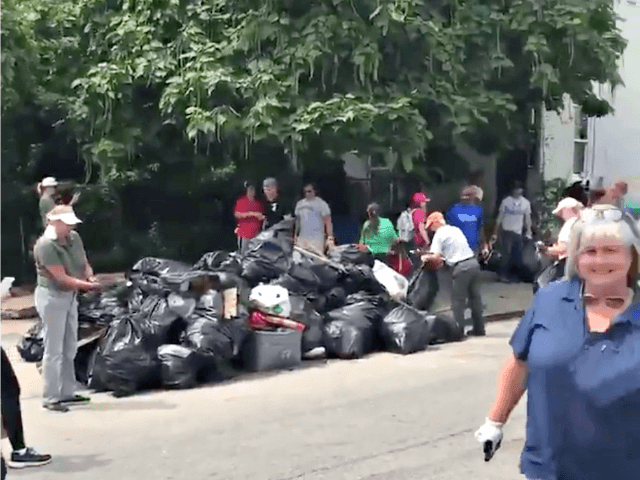 It shouldn't mater who organized a clean-up of neighborhoods in West Baltimore, they should be commended for their efforts. Photo: Twitter/Scott Presler

This week, Scott Presler, an admitted Trump supporter, helped to organize a clean-up of neighborhoods in West Baltimore in the district represented by Elijah Cummings (D-MD).  You remember the dustup between Cummings and Trump when the President described Cummings’ district as a “rodent infested mess.”

According to Presler, over 170 people volunteered their time, efforts and pickup trucks to shovel up trash, pull weeds and trim the grass, resulting in 12 tons of trash collected by the group in just over twelve hours.  Quite a feat, wouldn’t you think?

The group posted tweets and videos showing the before and after pictures, and even some interviews with residents thanking the President for bringing awareness to the situation in their neighborhood.  Presler call the effort “Americans helping Americans.”

Yet some, including the Baltimore Sun editorial staff, questioned the group’s motives.  In an editorial, the Sun suggested they were skeptical of the effort and felt it was simply a photo op for support of the President and questioned the use of the postings to support their skepticism.

To be honest, it does smack of a little one-upmanship, and seems to be timed to take advantage of the press received from the Trump-Cummings disagreement.  But does that really matter?  Even the Sun acknowledges there is a “silver lining” in that the neighborhoods received a much-needed cleanup.  Isn’t that enough to celebrate the actions?

According to the Sun, “…Mr. Presler’s presence in Baltimore reinforces the tired image of our failing urban cores. That the poor people in this dilapidated city can’t take care of their own neighborhoods and all the public officials around them have failed as well.”

I’m sorry, but the presence of 12 tons of trash collected from these neighborhoods does a whole lot more to “reinforce the tired image of failing urban cores” than the efforts by Presler’s group could possibly achieve.  If the City of Baltimore hasn’t taking care of this mess over years and years, how is it not failing its residents?

The Sun offered the solution was just not that simple, and I wholeheartedly agree.  Illegal dumping, from residents and outsiders will likely continue.  Unoccupied buildings and homes are magnets for criminal activity, and trash, vandalism and destruction follow closely behind.  The problem will return, unless there is a concerted effort to maintain the condition in which the neighborhood now exists.

But, if 170 volunteers can clean away a ton of trash per hour, how much can the citizens of Baltimore, with help and protection from the city’s officials, clean away in a weekend? In a month? In six months?

Whether it was a photo op or an altruistic endeavor matters little to the residents of the neighborhoods, who can now look at their area with a renewed sense of pride.  Presler’s group showed what can be done if people are willing to roll up their sleeves and make the effort.  They should be commended for their success.

Presler says he is working on organizing similar efforts in Los Angeles and New Jersey.  I wish them success, and I hope the residents of those areas join in the attempt.  You don’t have to be a Republican or a Democrat to get involved.

Americans helping Americans is a great idea.  Let’s see if we can’t spread the word.