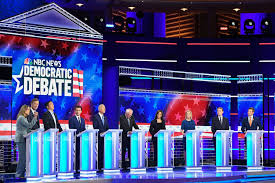 Are the Democratic Presidential candidates shifting too far left to retain the Party's more moderate base? PHOTO CREDIT: NY Post

It was pretty clear from last week’s debates the slate of Democratic challengers to President Trump in the 2020 election are racing at warp speed to the left to cater to the fringe elements of their party.  It almost seemed that every candidate was trying to out-left the previous one, but in all this currying the favor of the more outspoken followers, is the party turning its back on the base that built the Democratic Party in the past?

The squeaking wheel always gets the grease is certainly a true axiom, but the potential nominee for the Democrats is going to have to walk back a lot of comments if they want to win over the blue-collar base of the rust belt and the voters in the states the Clinton campaign took for granted.

The Dems are pinning their hopes on far-left ideology, currently making the most noise in a left-leaning media and left-supported social media, but does that one-sided presence translate into votes?  A small minority can whip up a frenzy around a particular event, but when people stop to consider their own situation and what it may look like in four to five years, some of that enthusiasm wanes to a more practical position.

Take immigration as an example.  From the recent debates, it seems the position for all the candidates is near to an open-border policy, with little to no vetting of those crossing our southern border and entering the US illegally.  They paint the picture with a humanitarian brush, those fleeing oppression in their home countries, starving families and caged children, and that certainly draws at the heartstrings of the general public.

But the voter also sees what happens after the smoke has cleared.  They see gang violence, drug and sex trafficking operations, and a potential for terrorist activity by those who pretend the be innocent migrants but have other intentions.  Real or perceived, the threat of violence, economic pressures and political instability weigh on the residents of border towns and areas of relocation for migrants.  At least some border control is seen as necessary

Sure, voters would like free healthcare, but most realize that nothing is truly free.  Someone will have to pay for these programs and they know it will be the taxpayer.  Most blue-collar workers, while they are concerned about rising premium cost and higher deductibles, are at least content with the insurance plan they get from their employers.  They may have reason to take pause when someone calls for a government-run healthcare system to replace private insurance, especially when they think about how inefficient government-run programs usually are.

They already resent those who have amassed fortunes during decades of “public service,” who fly around the country in private jets to make speeches about how the everyday Americans should give up their comforts and conveniences for the sake of climate change.

The political correctness attitude of our representatives doesn’t sit well with those who are wondering where they will find the money for their kids’ education and how they will deal with and impending auto repair.

Student loan forgiveness doesn’t really resonate with those who have already paid back their loans, or those who are near to completion.  What’s in it for them?

Free college is attractive on the surface, until you dig into the plans and discover they will only lead to ever-skyrocketing tuition costs, increased taxation to pay for it, and likely increased government debt leading to higher interest payments, a cost also to be borne by the taxpayer.  And who’s to say that governmental ownership of higher education payments won’t lead to government bureaucrats making the decision as to the career path of each child, who should go to college and who should not, and where they should go.  It only follows as a cost-cutting measure at some point in the future.

The promise of free stuff and far-left ideology will sway several voters, but the Democrats are counting on the general public to be ignorant of the way to achieve these goals.  Kind of like the “deplorables” were perceived in the 2016 election.

As an old farmer friend used to say, “I wouldn’t bet the south 40 acres on that!”