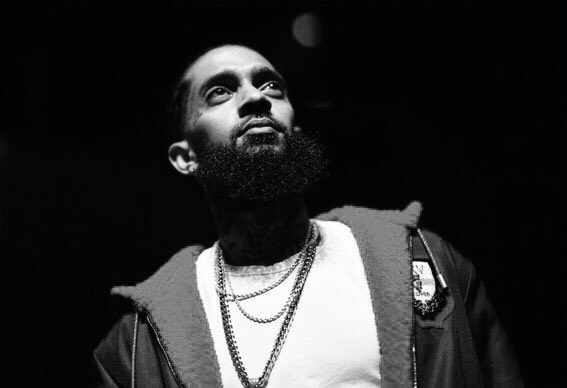 "Ten years from now, I would just like to have laid the blueprint down that other people can follow, that came from similar situations." ~Nipsey Hussle in a 2018 Black Enterprise interview with Mia Hall

All these feelings and emotions overcame me instantly when I heard about the shooting and subsequent death of Tupac Amaru Shakur in 1996. When he died, I was a 17-year-old “woke” high school senior. Tupac influenced my perspective on life, beginning at age 12 with the release of Brenda’s Got a Baby, and his death jarred me, like millions of other fans globally.

“That’s why I said I’m the Tupac of my generation, because I follow the red roses in the grey pavements. The rose that grew from the concrete. I know what Pac was trying to do.” ~Nipsey Hussle 2.27.2018 (clutch-mag.com)

Nipsey Hussle emerged as a rap artist in 2005 with the release of his first mixtape “Slauson Boy Volume 1”. Over the next five years, he released a number of acclaimed mixtapes, before leaving Epic Records in 2010, in a move to retain control over his work. In 2013, Nipsey released the $100 mixtape “Crenshaw”, which went on to sell out of physical copies, bringing in $100,000 within hours. He released his debut album “Victory Lap” in 2018, which was heralded as a classic project.

Throughout his career, in interviews, and on panels, Nip spoke truth to power. He emphasized the influence of energy and the necessity of giving back to our communities, in words and deeds. One of his most notable contributions is Vector 90, a co-working space introducing children from South Central L.A. to STEM while also creating opportunities for young visionaries looking to make waves in Silicon Valley. In 2017, Nipsey created the two-fold The Marathon Clothing, a physical store located in the Crenshaw strip mall he purchased, as well as a “smartstore” platform allowing fans to purchase merch and access new content. Sadly, it was in front of this very store, located in the neighborhood that groomed him, that he was shot 6 times.

Nipsey Hussle made notable contributions to the music industry that will be remembered for years to come. And his Grammy nomination for “Victory Lap”, was a fitting nod to his excellence within his craft. Yet it is Nipsey the father, life partner, community leader, visionary, and businessman that we are missing the most.

Angry. Heartbroken. Frustrated. Determined. Confused. Numb. Aching. Proud. Sullen. All these feelings and emotions overcame me instantly when I heard about the shooting and subsequent death of Nipsey Hussle on 3.31.2019.

As people from all demographics grapple with this great loss, which is sure to be felt for generations, just as Tupac before him, may we courageously carry on the work while finding answers to the pressing questions.