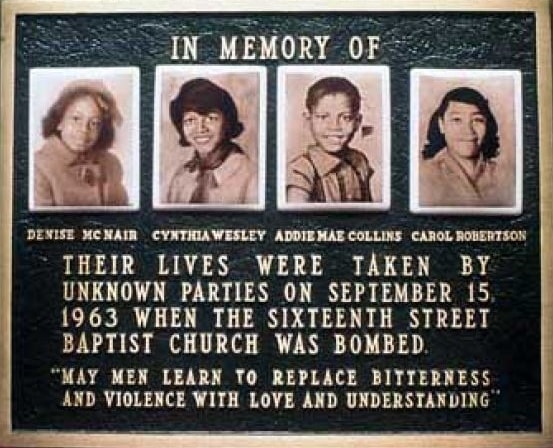 "Those who cannot remember the past are condemned to repeat it." ~George Santayana

As a 90s teen, it was impossible to imagine an America as hate filled as the one captured in black and white news footage from the 1950s and 1960s. The domestic terrorism and public displays of hate that seemed so commonplace during the Civil Rights Era were virtually unfathomable as realities in our evolved, late 20th century American society. Although I was aware of racial disenfranchisement and discrimination, even working actively to combat it, there appeared to be a general understanding that hate crimes and nationalist views were unacceptable by most members of society. However, the last 10 years have shown me a different America.

During the week of October 22, 2018, Americans were reminded that hate based on race and ethnicity are as prevalent as ever.  The week began with pipe bomb filled packages being mailed to political leaders and public figures throughout the country. Midweek in Jeffersontown, KY, Maurice Stallard and Vickie Jones were murdered while grocery shopping because they were Black. Then the unthinkable happened on Saturday, when a domestic terrorist murdered 11 members of a Pittsburgh synagogue, motivated by his anti-semantic views.

The tension within the country is mounting, and these acts seem to be proof that it has reached a tipping point. It is sometimes hard to believe that just a few years ago, people believed the nation had evolved and left its race-based hatred in the past. However, the last several years have proven the “post racial” theory is far from a reality. And although there is some protection under the law, the hatred from decades past has been unleashed and is right in our faces.

Until a few years ago, the bombing of the 16th Street Baptist Church that left four little girls dead seemed like an unfathomable hate crime that we would never see the likes of again. Yet the Emanuel African Methodist Episcopal Church Massacre in 2015 that left 9 dead and the Tree of Life Congregation massacre just last week, have shown us this level of hate is not a thing of the past. It is also a sobering reminder that even houses of worship are not safe havens from these attacks. So where does this leave us?

One of our greatest drum majors for change, Dr. Martin Luther King, Jr. stated, “We must accept finite disappointment, but never lose infinite hope.” As the news becomes bleaker by the day, and the future seems even more uncertain than ever, it is important we not lose infinite hope. Furthermore, it is crucial we do not allow fear to find a home in our psyches. As tragic as the last week has been, it is nothing compared to the level of hate endured by Dr. King, and those of that generation.

As we move forward from our present hate filled state, it is important to remember many of our ancestors left clues we can utilize to flourish despite the opposition we face. Understanding there is nothing new under the sun and only light can drive out darkness can direct how society manages the current cultural shift. The present state of the nation implores we remember the words of Bishop Desmond Tutu, “Hope is being able to see that there is light despite all the darkness.” History assures us of this.