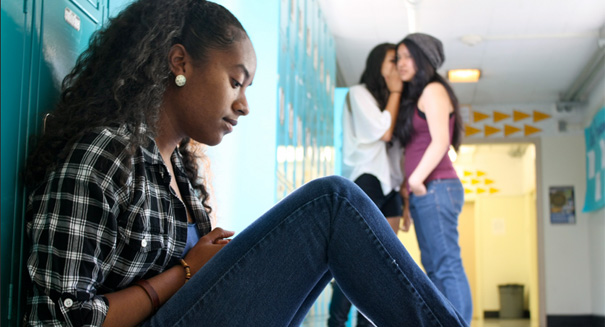 As much as we would like, we can't protect our kids from being bullied. What we can do is look for signs of those unable to cope with it.

Bullying has become a much-used word in American lexicon today.  While no one in their right mind would disagree that bullying is undesirable, I’m afraid there is one glaring fact that many people will refuse to understand. That is bullying can never be stopped, no matter how much we wish it could.

I know there are many who firmly believe in the utopian version of the world with flowers falling from the sky and everyone leading happy and untroubled lives, but in reality, it simply doesn’t exist and it never will.  At least not in this world.

Cain bullied Abel just outside the Garden of Eden, and bullying has existed in human nature ever since.  For those who don’t believe Cain and Abel or the Garden of Eden existed, archeological evidence shows that tribes of prehistoric men attacked and killed other tribes, probably the most egregious form of bullying, and hundreds of wars followed down through the ages.

If our children should miraculously escape bullying in kindergarten or grade school, they will most certainly face the issue in high school, college, and in their working careers.  In short, all this talk about educating our children to respect one another and eliminating bullying isn’t going to stop it.

Instead, what we should be focusing on is how to prepare our children and young adults to cope with any and all bullying they encounter along life’s way.  Sure, it would be best to never have to face with being bullied, but again, it will happen as long as there are humans inhabiting the same spaces on this planet.

The big question about bullying is why do some kids deal with it and move on, while others cannot let it go, and resort to committing suicide or mass shootings?  Since we’ve practically established that everyone gets bullied in some form or fashion, what triggers the small percentage that take such dramatic steps to end it?

How can we do a better job of recognizing those who are unable to cope with the bullying they are experiencing?  After they respond with a suicide attempt or try to kill their classmates is far too late.  Are there tell-tale signs that we are missing, or are we simply too busy to look?

Can we prevent these events from unfolding by doing a better job of listening to our kids, our students, or our friends?  Some teens find it difficult to discuss such matters with their parents or their teachers.  Yet, they post depressing thoughts on social media in many cases.  Should we be teaching our kids how to discreetly report such posts to someone who can reach that child before it gets so far out of hand?

It seems that after every school shooting, there are reports that the perpetrator had been posting on social media about shooting or killing, or committing suicide.  Where are we failing to make the connection to get some help for those troubled souls?  Is it the old “tattletale” stigma, or do we just have a hard time believing someone is going through a period that is so bad, it could drive them to take their own life, or the lives of innocent classmates and school officials.

But, I’m sorry, we simply can’t, and we need to face that fact.  We need to focus our efforts on identifying those so desperate they see no other route.  And we need to speak up, and get them some help before it’s too late.  It won’t be easy, but it will be worth it.