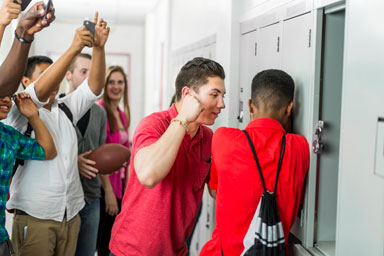 Supporters say armed teachers provide a deterrent that could also limit the carnage in the event of an actual attack.  Critics point out that armed defenders present in earlier shootings failed to make a difference.  In general, allowing more relatively untrained gun owners to carry guns will lead to more not less gun violence, they say.

These are not the only possible measures.  Another is stronger “violence-prevention.”  One of the most disturbing aspects of so many recent shootings is that law enforcement was aware of the shooter’s penchant for violence – and lacked the wherewithal to intervene.  Nikolas Cruz had posted a You Tube video suggesting he might attack and his social media sites were filled with lurid images of violence.  The FBI was notified but did nothing, apparently.  Even his former school had concerns about him after his knapsack was discovered to contain live rounds of ammunition.  But officials didn’t ban him from school property.

In some ways, the problem we are dealing with is endemic to a free society with a “free” market.  The gun lobby believes weapons should be sold with as few restrictions as possible.  Students, former students and even outsiders should be allowed to enter public schools at will.  Even extensive background checks on gun owners, or attempts to intervene on possible future shooters, run up against the deeply-ingrained American ethos of personal freedom and individual privacy.

Some believe the problem lies in better mental health programs and monitoring.  In part, perhaps.  It is amazing how many of the shooters were considered perfectly sane and rational by their loved ones, who never heard the rage and never saw the violence coming.  Eric Harris and Dylan Klebold, the shooters at Colombine, came from stable family backgrounds.  Klebold’s parents were religious pacifists.  None of that mattered as their children passed through adolescence and became increasingly troubled and angry and anxious to find some way to prove themselves to the world.

And there’s something else critically important here:  In nearly all of these cases, the shooters were bullied and taunted – often mercilessly – by their schoolmates and in the end felt trapped and unable to express themselves freely.  “I’ll show them,” is the recurring rallying cry of nearly every angry student with a gun.  “Anti-bullying” policies, while admirable, may not do much to alter the deteriorating social and emotional climate of so many of today’s schools.

In the final analysis, the problem lies not in our guns but in our culture, especially our school culture.  Schools, even in affluent neighborhoods, have become cauldrons of fear and intimidation, with many students anxious about simply showing up for class.  “Safe” schools doesn’t just mean safe from mass shooters, it means safe in general.  Many youth are falling into dark holes, creating their own nefarious bonds, and taking their vengeance and despair out on those around them.  Mass shooters are merely the most extreme expressions of this pent-up malevolence.

Some parents are suing schools that expose their children to “hostile” learning environments — and they are winning, too.  But the larger issue is how to get families consistently involved in their children’s lives during their formative educational years.  Insisting that schools have a “duty of care” should not blind parents to the need to participate in school management and oversight.   They are your kids — and it’s your tax money.

With this latest spate of school shootings — 18 since the first of the year, according to some reports — a dangerous new trend is emerging.   A suffused and angry rebellion is brewing nationwide in our educational institutions for youth.   But that rebellion is likely to grow — with more mass shootings — unless the deeper underlying causes of rising school violence are addressed.