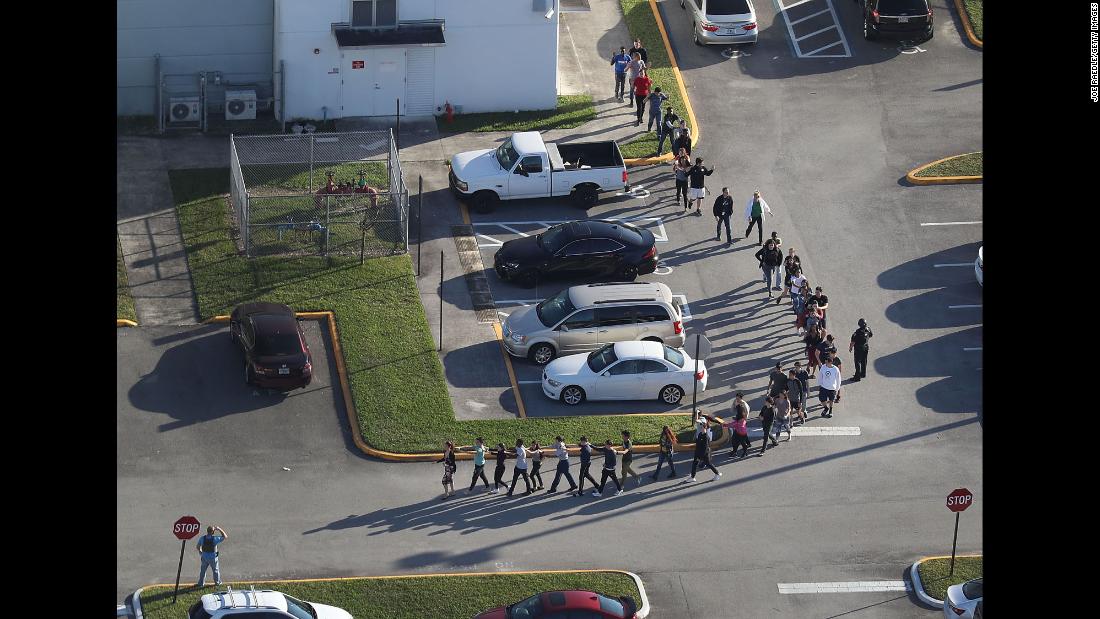 How have individuals become so desensitized to death and killing to allow for such a tragedy to occur? PHOTO CREDIT: CNN.com

I just can’t imagine what would motivate anyone, particularly a 19-year-old, to enter a high school campus and begin to gun down students and teachers.  But that is just what happened in Parkland, FL, as Nikolas Cruz entered Marjory Stoneman Douglas High School and began firing.

I can’t imagine the fear that was felt by the students and school officials when they realized what was happening, and began to wonder if they would survive or become one of the victims, so far numbering seventeen.

I can’t imagine the feelings of a student hiding in a bathroom or closet, waiting to hear footsteps or gunshots outside the door, taking the time to send a text to their parents telling them how much they love them in case they don’t survive the onslaught.

I can’t imagine the sickening feeling the parents got when they received the text from their beloved child, being totally unaware that anything was going on, but fearing this message may be the last communication they ever receive from their son or daughter.

I can’t imagine the concern that school officials felt as they were virtually powerless to stop the carnage, and realizing they will live with what happened that day for the rest of their lives, no matter if their lives ended today or many years from now.  How can they, should they survive, comfort the parents of those who lost their children, without feeling there was something they could have done differently that would have changed the outcome?

I can’t imagine the heart-pounding race by the parents from home or work to the school, desperate to find out where their child was and even if their child was still alive.  A parent’s worst fear was playing out before them as they sped to the scene.

I can’t imagine upon arriving at the high school, being told by police and law enforcement that you couldn’t enter the school building to rescue your child, and the helplessness you must feel as you are waiting for any information.  That is your baby in there, the one you held in your arms just a few years ago.  The one you fed and nurtured, took on vacations, watched them play baseball or soccer, as they grew into young women and men.

I can’t imagine the prayers that went up to a God to whom you hadn’t spoken in a while, but one whose help you desperately needed right now.

I can’t imagine that sinking feeling when you hear it has been reported that some students are confirmed dead.  Was it my child, or the child of a parent from down our street?  Could it have been a child that you watched at the basketball game last night, or the one that spent the night at your house last month?  Could it be both?

I can’t imagine how you feel when you realize that you will likely have to face someone you know who has lost a child in this tragedy, even if your child survives.  Can you, the parents of that child, or even your own child, ever recover from the events of this day?

I can’t imagine your anger as news reporters and cameras are shoved in your faces at this most agonizing moment of grief, trying to capture the pain, concern, or suffering on your faces for a news headline or sound bite on the national and local news shows.

I can’t imagine your disgust at the politicians and activists that immediately pounce on this period of unfathomable shock, anger, and heart-wrenching pain to make an ideological statement.

I can’t imagine how tightly those parents whose children came home last night held, hugged, and cried with them.

I can’t imagine how things will ever be the same again.