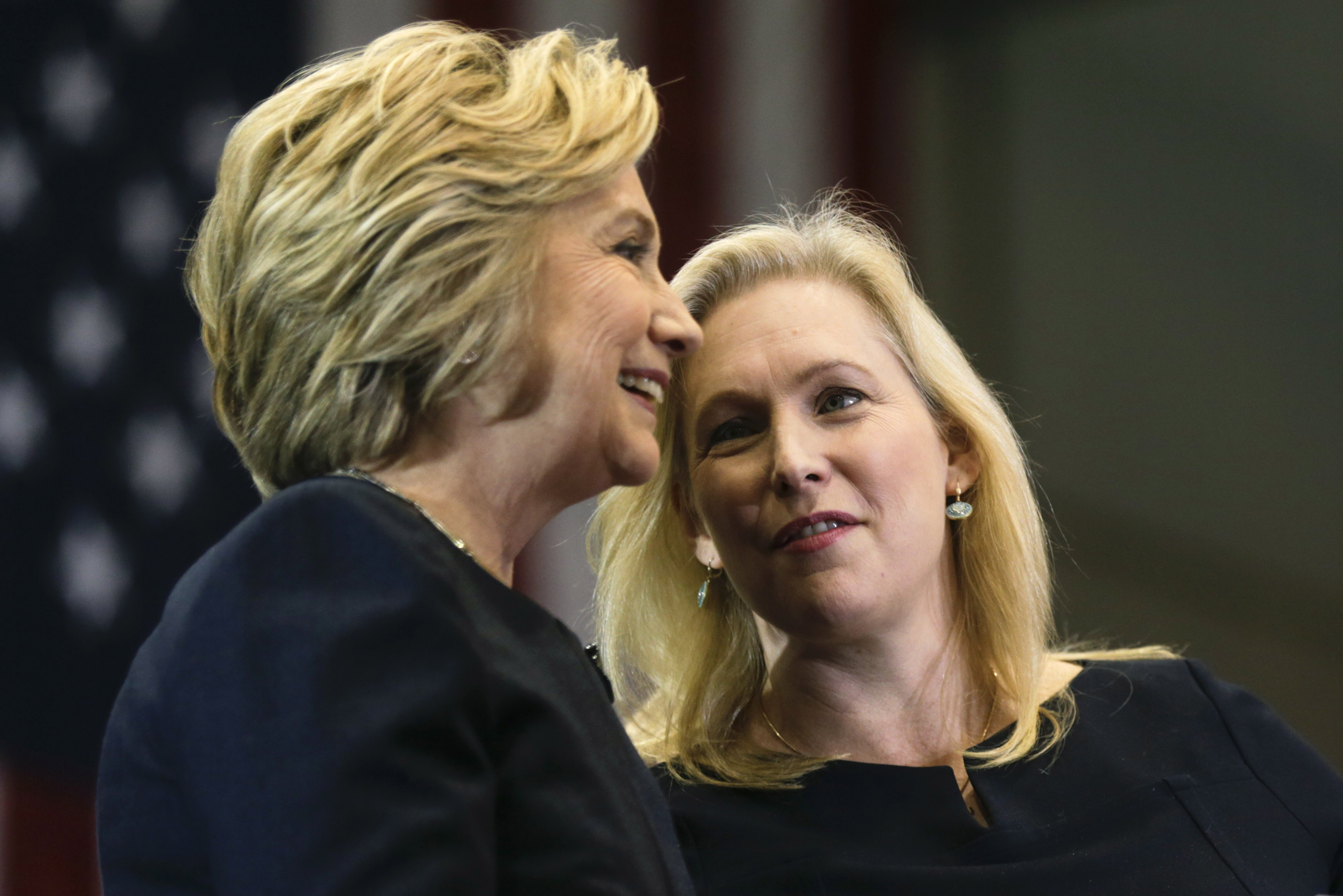 Since taking office, Gillibrand – who just so happens to be married to a New York banker – has gone out of her way to cozy up to Wall Street, especially Goldman Sachs, the same investment banking firm that enjoys unusually close ties to the Clintons.  Yet much like Hillary, she seems oblivious to the consequences of being so closely tied to America’s financial elites at a time when the party is moving left and embracing populism.

In 2011 and again in 2013  she led the charge to have then-Treasury Secretary Jacob Lew lift federal regulations on derivatives trading, the very phenomenon that triggered the 2008 crash.  New York bankers, who were once skeptical of Gillibrand, now view her as a loyal friend — and indeed, as their political spearhead. And for her service, they have showered her with campaign donations.

Indeed, now that Schumer in his role as the Democrats’ #2 man in Congress has scaled back his Wall Street advocacy — in part to appease the party’s growing populist wing — Gillibrand has eagerly filled the void.  One analyst has rightly called her the Senate’s  “go-to advocate for the financial services industry.”

And she’s already been called out on it.  For example, British talk show host, John Oliver, in a 2013 interview, asked her point blank to explain the logic of her crass affinity for America’s wealthiest capitalists — and she couldn’t, not credibly.

“You were the number one recipient of money from Goldman Sachs in 2011 to 2012 for all sitting congressmen. J.P. Morgan was your number two corporate donor over the last five years. What I deeply want to know is, what do you have to do for that? What is required of you for that money? Because it makes me uncomfortable,” Oliver said.

Gillibrand, obviously flummoxed, waxed prosaic about the need to “rein in” the banks and to create more “transparency.”   But while noting the need to “get money out of politics,” she had no answer for Oliver’s persistent questioning about the impact of Wall Street donations on her own politics.

In fact, the closer you look at Gillibrand’s entire trajectory, the more her political-shape-shifting reminds you of her other mentor — Hillary Clinton.   It’s forgotten now but when Gillibrand won her congressional seat in 2007,  she was still known as a “Blue-Dog Democrat” – pro-gun, weak on abortion rights, and broadly anti-immigration.   Those views actually placed her to the right of Clinton, who, even in her conservative heyday, never swung the pendulum quite that far.

But when Gillibrand assumed statewide office, it wasn’t long before she swung sharply the other way – supporting the Holy Trinity of gun control, abortion and immigration.  Like Hillary, she seems to view political opportunism as a personal asset, an emblem of her feminine guile and her ability to maneuver.  And yet she has never really wavered in her support for Wall Street.

And that’s going to be her Achilles heel.  At best, Gillibrand represents a re-packaged version of the Clintonian neo-liberalism that is no longer in favor among most Democrats.  The party base is angry and seeks more than mere power — it wants a change of direction.   In 2o16, voters looked at Clinton and Trump, and to the shock of many Democrats, many found Trump’s “America First” nationalism — with its rejection of “globalism” in all its forms — more compelling.  In fact, most of the working class — and nearly half of union households, traditionally loyal Democrats — voted for him.

In promoting Gillibrand, senior Democrats may finally be admitting that Hillary Clinton, despite her own desperate clinging to the mantle of presidential heir-apparent, is no longer the party’s standard-bearer, even for women.  The problem?  Gillibrand can’t even fill Clinton’s shoes.  She lacks Clinton’s long history of involvement in progressive causes, from farm worker organizing to civil rights, and she’s no match for the former First Lady’s wonkish command of  a wide range of domestic and foreign policy issues.

In fact, there’s another dirty little secret about Gillibrand:  In her seven years in office, she hasn’t sponsored a single piece of significant legislation — not one.

Even her demeanor, while slightly warmer than Clinton’s, is far less forceful and compelling.  Hillary is brusque and alienates, while Gillibrand is wan and ineffectual.  She’s to the Democrats what Jeb Bush was to the GOP:  A low-energy politician who lacks the elan and the charisma to command a room, much less a nation.   In fact, Gillibrand, according to polls, barely registers within her own party.  Outside of New York, she is virtually unknown.

For all their talk of Trump’s weaknesses, Democrats face an enormous challenge finding a candidate that can take on a president who is racking up legislative victories, overseeing a booming economy, and improving his favorability rating with mainstream voters.  Trump, to be  sure, has permanently alienated a segment of the American electorate, and some influential GOP moderates, like South Carolina’s Lindsay Graham, have repeatedly derided him a “jackass.”

But at least he’s pulling a real plow.  Gillibrand, for all her alleged sex appeal, is little more than a gilded show pony, largely owned by people of privilege and safely ensconced in a stable on a sprawling New York horse farm.  This is no way for Democrats to win the 2020 race, or any race.