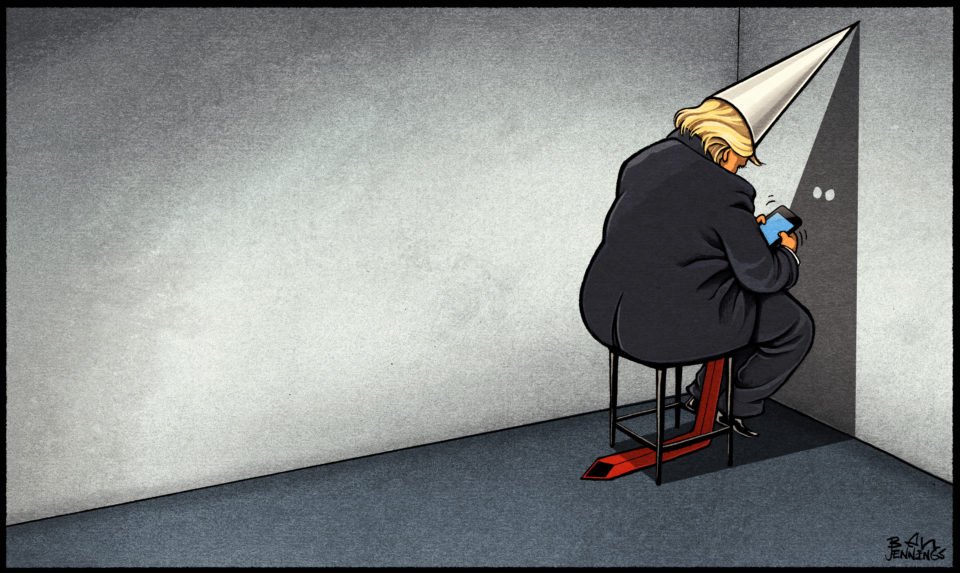 Instead of talking Puerto Rico or gun reform for Nevada, All these horrible tragedies and he's bored and would rather, Cause a Twitter storm with the Packers. ~Eminem “The Storm”

For nine months, the world has been subjected to a consistently disrespectful, disruptive, and dismissive “leader” whose only agenda appears to be disorder. Since his inauguration on January 20, 2017, Donald Trump has displayed little regard for things that do not clearly benefit him or his businesses. He ignores and breaks protocol on a whim, with no thought about future implications.

Many have described him as unpresidential, impulsive, or dangerous. I prefer the term trash. According to Merriam-Webster’s dictionary, “trash” is defined as “rubbish; nonsensical; empty talk; something in a crumbled or broken condition; matter intended for purely sensational entertainment.” And when examining the course of his tenure thus far, this about sums it up. Need proof?

Here are four examples proving the POTUS is trash:

Most workplaces and school districts have social media policies that ensure the technology is used responsibly. Unfortunately, the same oversight is not required for the Commander and Chief of the United States. Trump’s Twitter fingers are far from professional or presidential, and his display of keyboard courage is typically reserved for impetuous adolescents. Were it not for the power afforded to the office he presently holds; this account would be purely sensational entertainment. The unfortunate fact is, it is very real, and his tweets hold repercussions. Most recently, he used his personal account to disrespect a Gold Star widow less than a week after she buried her beloved, within minutes of viewing her television interview. His social media etiquette is beyond shameful, and carries implications yet to be fully realized.

From the start of Donald Trump’s presidential campaign, he has made it clear white supremacy is his party of choice. His most staunch supporters were lured in by his no holds barred attack on Mexican Americans, women, and African Americans, among other groups. In a television interview conducted four days after Trump’s inauguration, self-proclaimed white supremacist Richard Spencer stated, “Trump is a white nationalist, so to speak. He is alt-right whether he likes it or not.” A couple weeks later, former Ku Klux Klan leader David Duke tweeted, “everything I’ve been talking about for decades is coming true and the ideas I’ve fought for have won.” The last nine months have proven these proclamations correct, from Trump’s “both sides” comment following the murder of Heather Heyer during a white supremacist rally to his calling athletes protesting racial injustice “sons of bitches”. Trump and his platform are the definition of rubbish.

Since taking office, Donald Trump has been a non-stop loop of empty talk.

On September 20th, Hurricane Maria devastated Puerto Rico, leaving most of the island without electricity, water, or cell phone towers. A month later, this status only improved slightly. On October 19th, when asked to rate his hurricane relief response, Trump gave himself a “10” out of 10.

This is just one of the most recent examples of this president’s empty claims that have now become commonplace in our daily news cycles. Previously dubbed “a false sense of reality”, this nonsensical talk is the definition of trash.

As of January 20, 2017, the office of President of the United States of America has exhibited multiple signs of being in a broken condition.

Donald Trump has routinely used his position to call for the firing of private citizens, to promote his private companies, and completely disregard the tenets expressed in our constitution. As of October 22nd, while the nation has faced numerous natural disasters and national tragedies, Donald Trump has spent 75 days, or about 25% of his time in office, at one of his golf resorts. From January to September, 14 White House staffers were fired or resigned, an average of nearly two per month. Instability, mediocrity, and unprofessionalism have been the symbol of the current presidential administration, marking its broken condition.

And despite all this, 41% of voters view Donald Trump favorably. In the words of the late poet and philosopher Dr. Maya Angelou, “When someone shows you who they are, believe them the first time.”