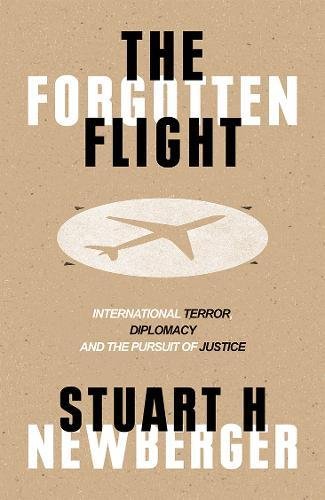 Once in a while, a work of non-fiction comes along that enthralls the reader in the same fashion as a fictionalized political thriller.

A newly-released book by Stuart H. Newberger titled The Forgotten Flight: Terrorism, Diplomacy and the Pursuit of Justice

“The Forgotten Flight is just such a book, and reads more like a suspense novel than the historical document it actually is.

Newberger chronicles the details of French airliner Union des Transports Aeriens (UTA) 772, a DC-10 carrying 170 passengers and crew, that was blown up by a suitcase bomb planted by Libyan terrorists on September 19, 1989, over the desert in the south-central Sahara.

But the book is more than a nuts and bolts rendering of facts and figures, although plenty of facts are presented.

The writer takes the reader on the journey to recover evidence of who was responsible for the air disaster by French investigators, through the twists and turns of negotiations attempting to assign the responsibility for the attack, as well as the political machinations that took place behind the scenes as French, US and Libyan diplomats jockeyed for position and reputation on the world stages.

Coming soon after the bombing of Pan Am Flight 103 over Lockerbie, Scotland, the French flight failed to receive the headlines and press that kept the earlier disaster at the forefront of world opinion, as well as on the radar of the US government, since some 189 American citizens perished aboard Flight 103.

Newberger, and his law firm, took on the case involving the seven Americans who died aboard Flight 772, and the American owner of the aircraft, seeking restitution from Libya and its leader, Colonel Muammar Qaddafi, as perpetrators of state-sponsored terrorism.

The list of characters involved in the investigations, the negotiations, and the court proceedings is long and almost should come with a scorecard to keep them all straight, but the author deftly documents the back-room deals, political pressures, and legalistic wrangling that led to the conclusion of the saga.

All of the motions, proposals and counter-proposals, with each player seeking their own best interests, progress towards a climax while keeping the reader engaged and anticipating the next plot turn along the way. The courtroom presentation of the forensic evidence of the disaster is particularly compelling, causing this reader to pause and contemplate the testimony for quite a while.

Newberger does an excellent job of presenting the many views from each participant’s prospective, and does a great service to those who perished aboard UTA Flight 772 and their families, as their attorney, and again by re-counting these events. Their loss may have been overshadowed by Pan Am Flight 103, but is forgotten no more.