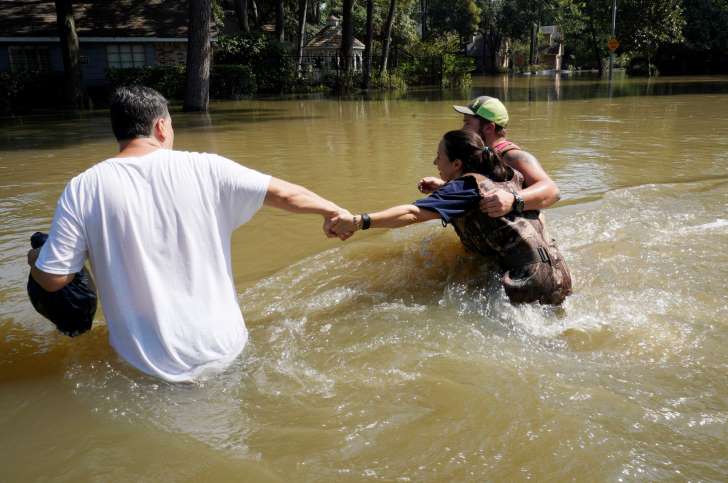 Houston, unlike New Orleans, is above sea level — but with unprecedented flooding (50 inches and counting), the damage may be even greater.  And in an eerie parallel to Katrina, talk is growing that the city’s developers might have over-emphasized highway and real estate development at the expense of flood control, and should have been better prepared and equipped for Harvey’s massive rainfall.

Additionally, Houston’s decision not to evacuate the city – in contrast to its decision during Hurricane Ike in 2008 — has exposed a million Houstonians to property damage and displacement.  The fact that such a small percentage of the city’s population – about 1 in 6 — was insured against flooding could greatly increase Harvey’s financial cost and fall-out – and raise Katrina-like questions about government neglect and bias.

Significant lessons may also be emerging in the area of disaster response.  For example, while traditional disaster relief players such as the American Red Cross and Save the Children are standing by to help, some well-heeled social media players are stepping up, too.

Some, like Google, Inc. – which like Facebook and others is now a sizable global charity in own right — are seeking to avoid the well-publicized shortfalls of earlier disaster relief efforts.  Apparently, that’s not sitting well with a number of established relief agencies that feel judged and shunned.

Last week, Google shocked much of the philanthropic world by announcing it would ask all Harvey contributors to donate to a small untested entity, the Center of Disaster Philanthropy (CDP), rather than channeling funds to established relief agencies like the Red Cross.  The move is partly in response to widespread criticism of the Red Cross’s relief effort in Haiti, which failed to deliver a substantial portion of relief supplies to those in need.

CDP is not an operational agency but offers strategic planning and advisory support to others operating in the field.  By utilizing CDP, Google need not get into the messy business of “vetting” individual agencies and might avoid direct criticism if Harvey relief efforts fall short.

But Google’s move has set off a storm of controversy because it could well lead CDP to become something of a disaster relief “czar.”  Most established relief charities consider CDP to be too small, inexperienced, and administratively weak to manage millions — and perhaps billions — of dollars in disaster relief.  But their own efforts to establish a funding relationship with the IT giant have failed thus far.

It’s a sign of just how much the rules of the game regarding disaster relief may be changing, in part due to the rise of a new breed of corporate mega-donors (including Apple and Microsoft) with a fierce independent streak but also rising citizen demands for strict aid transparency and accountability.

For all of these reasons, there may be a real silver lining once the horrible damage from Harvey is contained.  The Trump administration, which has sought to cut federal disaster relief funding and considers the climate change debate nothing short of a “hoax,” will likely come under growing pressure to adapt itself to post-disaster realities, including calls for institutional and policy changes, which invariably means more, not less, government.

And don’t forget:  Texas is a blockbuster Red State that Democrats still have some ambition of tilting Blue.  Failing to demonstrate anything but complete responsiveness to their Republican base here could place Trump and the GOP in considerable jeopardy politically.

The upshot?  While Trump will surely benefit in the short term, by appearing to ride to the rescue, Harvey could test his ideological predilections when it comes to actually lassoing the post-disaster funds and the political will to fashion a long-term response.

How America thinks about natural disasters and prepares for and responds to them – not just in the US but abroad — are higher-order issues of a distinctly non-partisan cast – and they require a measure of forward-looking vision and “globalism” that Trump typically disdains.

Who knows — perhaps only Nature herself can cure the former reality TV star of his penchant for rhetorical excess — and defiance of facts — in ways that his most virulent critics have failed thus far.