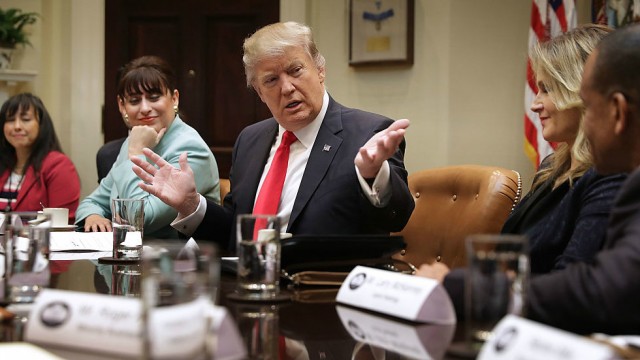 This is a huge incentive for small companies to take the risk of expanding their operations beyond what they might otherwise contemplate, especially in a sluggish, low-growth economy where consumer confidence is still recovering from the Great Recession.

Its supporters, including the non-profit Tax Foundation, say full expensing will create a tipping point for small businesses to jump into the economy pro-actively, allowing more workers to be hired more rapidly.  Small businesses typically account for two-thirds of all new jobs created in the economy though some analysts say the figure is closer to just over half  or even just a third, if you only count the smallest of small businesses (those employing 50 employees or less).

But not everyone supports the new initiative.  In fact, other business conservatives inside the GOP – especially those representing larger corporations – see full-expensing as a threat to their larger tax-cutting agenda.  These Republicans prefer to prioritize Trump’s call for a reduction in the corporate tax rate and worry that the already narrow path for tax reform cannot accommodate both provisions.

Like the complicated horse-trading on alternatives to ObamaCare, which eventually could not be managed, retaining full-expensing could prove to be a big challenge for Trump.

But it’s one that holds enormous political potential.  Big business may contribute to super-PACS and help fund elections, but they are relatively few in number.  Small businesses are potentially a larger voting constituency than veterans, Hispanics or African-Americans.   The latest polls indicate that more than 60% of small business owners are highly optimistic about Trump and his agenda.

A decisive legislative victory on full-expensing could put even more of them squarely in the Republican camp – while providing real dividends for the economy.

The fate of full-expensing won’t be decided until later this year.  But the implications seem clear:  along with other measures aimed at stimulating small business, including a new and badly-needed infrastructure bill, Trump’s more “populist” approach to the economy could expand the GOP’s political base in ways that past Republican – to say nothing of Democratic – candidates would hardly have imagined.