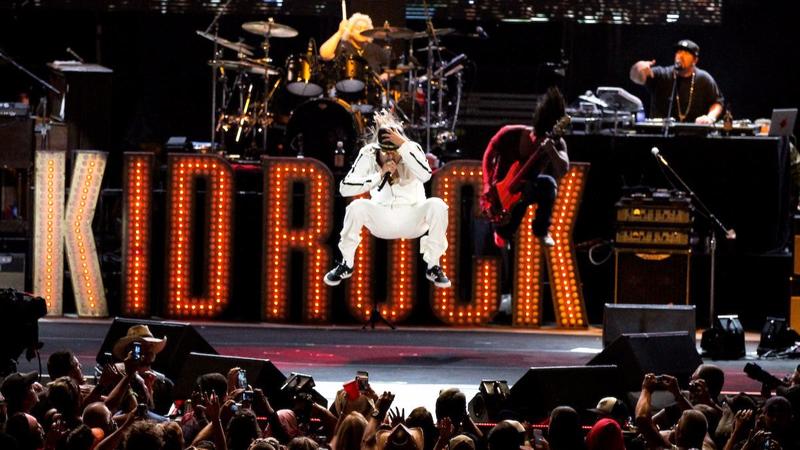 Kid Rock for the United State Senate?  It sounds like a publicity stunt, but if the latest polls are accurate, the Republican-leaning musician may have a decent chance of besting current office-holder Debbie Stabenow in Michigan, a traditional ‘blue” state that Donald Trump wrested from the Democrats last November.

Democrats are not expected to fare well in next year’s Senate contests, in part because so many of their own seats are up for grabs in states like Michigan where Trump beat the odds, while the GOP has only a handful of its own seats to defend, mainly in traditional strongholds where a Democratic upset is highly unlikely.

But Trump only won Michigan by ten thousand votes – far fewer than in Rust Belt neighbors Ohio or Pennsylvania.  And Stabenow, a Democrat, is still popular, having been re-elected twice.

Still, the latest head-to-head polls should have Democrats worried.  In one poll conducted two weeks ago, Rock trailed Stabenow 50%-42%, which shocked many observers.   However, a more recent poll by Trafalgar shows the one-time pop icon (whose real name is Robert Ritchie) with a slight lead.  A number of top Democrats have begun warning their party that the threat from Rock is real.

And while Rock is not yet a candidate, officially, there are growing signs that he plans to be.  He’s already launched what looks like a campaign web site and has begun producing posters and T-shirts that his supporters might wear.  He’s also begun hinting in interviews that he really does intend to run.

What does Rock stand for?  He’s stridently pro-military and pro-national security and opposes abortion and even gay marriage.  However, like many conservative Democrats, while personally against ending fetal life, he believes ultimately, it’s a woman’s “right to choose.”

He has the same nuanced view of gay marriage – opposing it in principle, but not as a matter of law.  Rock, who claims to be an ordained minister, says he would have trouble officiating at a gay wedding, but suggests that he would likely do so anyway.

The real thrust of Rock’s politics, though, are populist, and indeed unabashedly, “Trumpian.”  He endorsed the billionaire real estate mogul in 2016 just as he endorsed GOP presidential candidate Mitt Romney in 2012.  As a token of his affection, after Trump was nominated at the GOP convention in Cleveland, Rock agreed to perform a free concert for his followers.

Critics of Rock are already suggesting that his expected candidacy reflects a “terrifying new normal” in American politics which they attribute to Trump’s ascendance.  The assumption is that such candidates, though manifestly unqualified to hold higher office, appeal to the electorate’s baser instincts. By stirring anger and fear, and positioning themselves as anti-establishment, they are able to sway voters, especially blue-collar workers and independents, to rally behind their candidacy.

But that’s an exceedingly narrow and partisan view.  In fact, Rock’s emergence and growing credibility is hardly a recent, let alone a Republican phenomenon. Discontent with two-party system and with the usual button-downed figures that run for Congress is widespread and growing.

In recent decades, improbable independent-minded upstarts like Arnold Schwarzenegger and professional wrestler Jesse Ventura have captured state houses in California and Minnesota, respectively. And in the current Senate, the effects of populist insurgency are apparent in figures like Al Franken and Joni Ernst, neither of whom had any prior political qualifications before running and winning — handily — among voters fed up with “business as usual in Washington.”

Ernst’s pedigree was that of a female war veteran with a brash outspoken manner much like Rock’s.  And Franken, though mild-mannered, decidedly liberal, and cerebral in style, also built his reputation exclusively through the entertainment media.  With other entertainment-based figures like Will Smith and Kanye West contemplating their own future runs for office, we may be witnessing the beginning of a new and unmistakable trend in which mass political appeal and mass entertainment appeal have become inextricably intertwined.

The upshot?  Going after Rock as an unqualified “novelty” candidate isn’t going to fly with most voters anymore.  Assuming he does run – and despite the early indications, it’s not quite clear that he will in the end — the case against Rock must be made on the merits.

For now, Stabenow is taking the rumors about the Rock in stride, while gently pooh-poohing her prospective rival.  In a recent interview, she praised the singer’s virtuoso guitar style, implying that he might want to stick to what he knows best.  She also noted pointedly that she was “too busy fighting for Michigan” to pay much attention to all the hoopla.

But if and when Rock’s real intentions become clearer — and he clarifies his political agenda for Michigan, and begins  criticizing Stabenow by name  — she won’t be able to avoid the “guitarist in the room” for long.

And neither will the GOP.  As recent votes on the Gorsuch nomination to the Supreme Court and Obamacare have shown,  major national policy issues can hinge on the support of a single senator or two.  The Republican lead is narrow, and a small swing one way or the other can decide the fate of sweeping and hotly-contested legislation.

Rest assured, if the buzz around Rock continues to grow, there will be movement in  his direction from the Republican leadership.  And a critical Senate seat that Democrats assumed was completely safe may turn out to be far more vulnerable than they’d ever imagined.