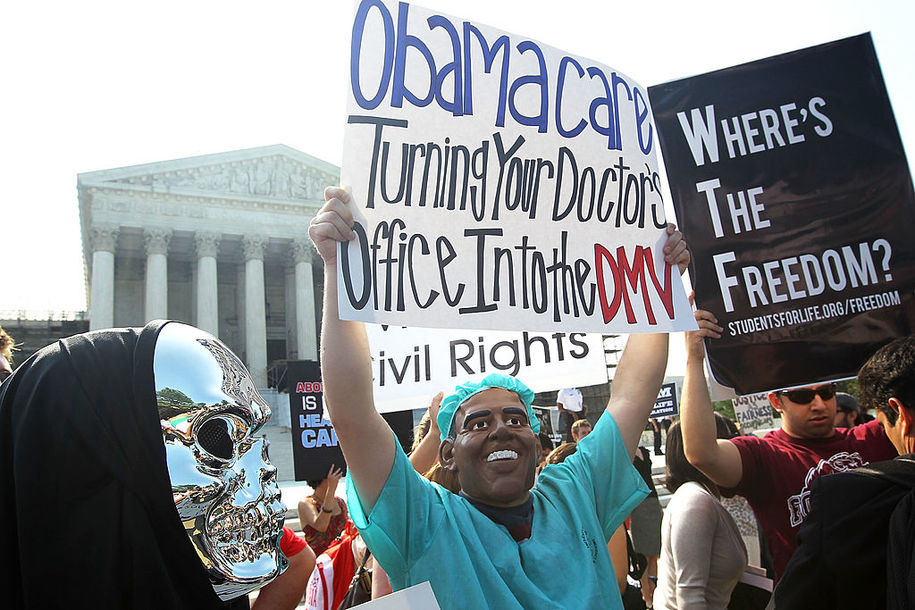 Obamacare is a hot mess, and someone will have to clean up the debris.

As predicted by most on the right many years ago, the Affordable Care Act is crumbling and falling like the house of cards it was designed to be.  And now that the Republicans are in charge, should they try to plug the holes in the ship, or jump into lifeboats and row for safe ground?

Recent news that major insurer Humana announced the company would not be participating in the exchanges in 2018, along with Trump’s executive order preventing the implementation of a new rule to pay a penalty for not having coverage in 2016, have sounded the death bell one more time for the flawed attempt at getting insurance coverage for all Americans.

If major players like Humana can’t turn a profit within the exchanges, what hope do the smaller insurers have of doing so?  They will also soon realize they cannot stay afloat covering only the sick while the heathy are not subsidizing the policies, and they in turn will also abandon the exchange, leaving many areas of the country with no choice of coverage, or at the very minimum, only one.

The question is, does Trump plan to make good on his campaign platform promises to repeal and replace Obamacare, or does the President and Congressional Republicans see a different route?  Admittedly, even the most conservatives see parts of the Act they would like to keep, and eliminating things like extended coverage of children until age 26 and coverage for pre-existing illnesses would squander a good deal of political capital among the more centered voters.

Probably the best move for the Republican Party is to let Obamacare collapse, but that is not the best thing for those who currently depend on exchanges for their medical coverage.  Like it or not, what was the worst thing going for the Democrats, the failure of all of Obamacare’s promised benefits, has since the election, become the anchor around the neck of the Republicans in office.

Any move they make now will be condemned by the Democrats as the reason for the problems with Obamacare, despite adequate evidence the Act was a complete failure even before Obama left office.  A mostly compliant mainstream media will parrot the narrative and the Republicans will be seen as the reason people are losing their coverage, instead of the true causes.

But making no moves at all will alienate their base, many of which voted for Trump because of higher premiums and deductibles and other issues related to the Act in the first place.  And many of those middle-of-the-road voters who leaned towards the left but voted for change in the election will feel betrayed.

The Republicans are in between the proverbial rock and a hard place, and the moves they make with regard to health insurance will go a long way in defining Trump’s presidency, as well as the 2018 mid-term elections.

Regardless of what they do, Obamacare was doomed to fail from the start, and fail it will.  What remains to be seen is what can be regenerated from the wreckage, and which party will receive the political benefit.

Ironically, those Americans that the Affordable Care Act was intended to help, the millions of Americans who were unable to afford health insurance coverage, may turn out to be the true victims of the collapse.