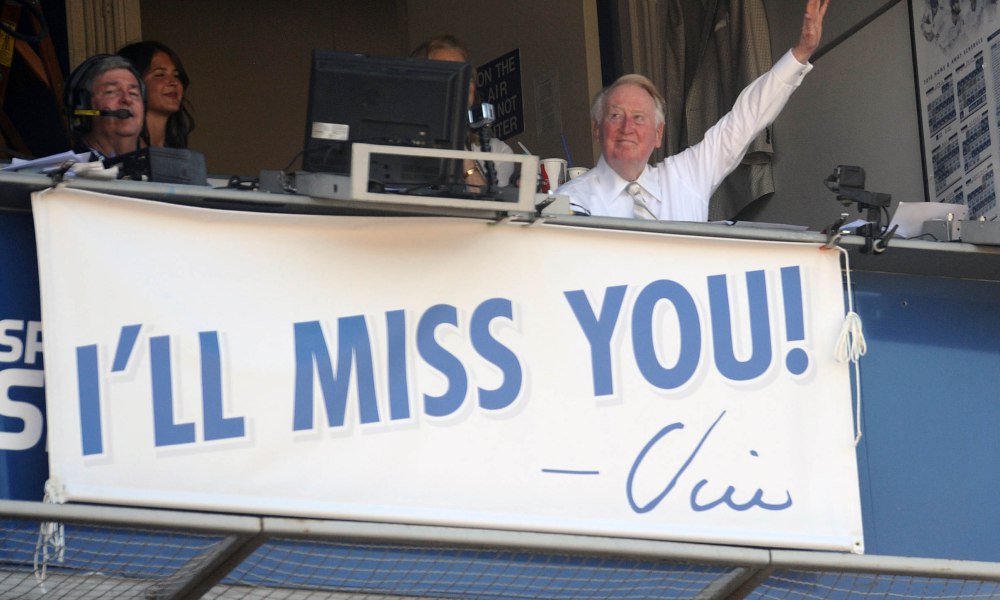 As I am writing this, I have the television turned on to a baseball game between the Colorado Rockies and the Los Angeles Dodgers, but I am not really a fan of either team.  I am watching because today is the final broadcast from legendary Dodgers’ announcer Vincent Edward “Vin” Scully.

It is sort of an end of an era, certainly for Scully who informed us last year this season would be his last, but also for the generation of baseball announcers that many of us recall as the radio voice that came into our living rooms and bedrooms as young children, and who took us all to exotic places we thought we would never visit.

Not all of us grew up in major cities with major league teams close by.  Like me, growing up in the Deep South, where the big leagues had no teams until the Milwaukee Braves moved to Atlanta in 1966.  Houston was granted a team in 1962, but Houston is as about far from where I lived as was St. Louis or Cincinnati, making the trip to a ballgame quite an adventure, and unlikely to happen at all.

All we had was the radio, and an occasional Game of the Week on the television, which for our old black and white tv, wasn’t exactly like being at the game.  But for those of us who grew up listening to games on the radio, the announcer was our connection to the ballpark.  These announcers used flowering phrases to describe the not only the action of the game, but their view of the sights, sounds and smells to provide an experience that made the listener feel as if they were actually there.

People actually spoke with a more poetic-type language in those days, unlike today’s prose, sprinkled with contractions, buzz words and catch phrases.  And, since there was no video, the airwaves were not often silent, as the game chatter and descriptive comments were constant to keep the listener involved, and informed.

Vin Scully began his career with the Dodgers when they were in Brooklyn in 1950, the year before I was even born, moved with the team to LA in 1958, and continued to bring the pictures, descriptions and accounts of the games to millions over the years.