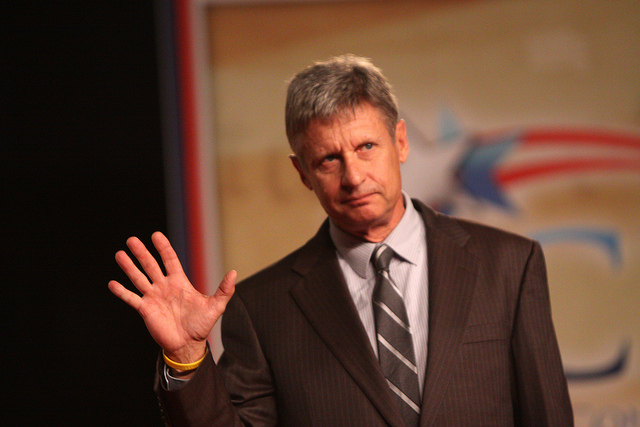 It's a private club. They're not in it.

America’s two-party system persists despite the disillusionment and disdain most Americans have for politicians and government institutions. At an innate level people know that something is wrong, yet cling to the belief that if they can just pick the ‘right’ party or candidate things will change. It is the classic maxim of insanity: doing the same thing over and over again and expecting different results.

Continuing to vote for the same group of politicians with the expectancy that they will promote the interests of the common people above those of the special interest groups and big businesses who financed their campaigns, is futile. It is akin to playing the lottery or gambling in a casino. In the case of the former, the likelihood of winning is millions to one, and in the latter, the house eventually wins.

Every four years the Democrat and Republican candidates engage in a Kabuki dance designed to entertain, while simultaneously perpetuating the possibility that voters will play a meaningful role in defining and controlling the destiny of this nation. Then, to the subsequent lament of Americans, elected politicians maintain the status quo and further diminish the populace’s economic prowess, educational opportunities, and upward mobility. As P.T. Barnum is credited with saying, “There’s a sucker born every minute.”

In the case of Donald Trump who portrays himself as the champion of the common man, and Hillary Clinton, who by comparison to Bernie Sanders, represents more of the same, Barnum could not be more accurate. Americans are being duped.

Sanders’ movement imbued supporters with real hope. The young people who overwhelmingly supported him did so because their futures are being stolen by the present generation. They believed Sanders could stem this tide, secure their potential, and enable them to earn competitive wages unencumbered by massive student loan debt. It is why he was able to raise so much money from small donations. His campaign was revolutionary and reminiscent of a time when people-power changed the status quo in America.

In the case of President Barack Obama, the change he promised and which galvanized the nation intimated that all Americans would win. But, in truth, we elected him president as an expression of our desire as a nation to push beyond institutionalized racism. Obama represented the potential for a paradigm shift in our social contracts through the dissolution of biases in our political, social, and religious institutions. We now know this did not happen. Quite the contrary, we understand that ‘change’ may have been the most overused and insincere word in the 21st century U.S. electoral process.

It has become a cliché as empty and annoying as the catch phrase – ‘thinking outside of the box.’ Yet, perhaps if more people engaged in critical thinking, they would come to a conclusion that they have been voting against their interests. Many hoped Sanders would triumph and secure the Democratic nomination despite all evidence to the contrary. His movement was delegitimized as socialist, a moniker that is anathema though most Americans could not define its tenets. The truth of the matter is that Sanders fully supports the democratic process, which is why he remained in the race even when it became apparent that his populace uprising had no chance of succeeding.

Into this quagmire waded third-party Libertarian candidates, Gary Johnson and Bill Weld. One can argue about the efficacy of the configuration of this ticket, with many feeling that Bill Weld would have been the better option as the presidential nominee; however, it would not have substantively altered the obstacles they face to win the presidency.

“… the nasty fact is that our winner-take-all election system, adopted from 18th century England, has the potential to leave up to 49.9% of the voters in any district feeling unrepresented — whatever their race or ethnicity.” ~ USA Today Editorial, 6/30/95

“The system of proportional representation ensures that virtually every constituency in the country will have a hearing in the national and provincial legislatures.” ~  Bishop Desmond Tutu, The Rainbow People of God, 1994

(Source: Why Not Proportional Representation)

Twenty-three nations with democratic governments have multi-party systems which function effectively. Thus, this disproves the assertions that such governance is impossible within a democracy. If this is the case, then Germany, South Korea, South Africa, India, and Israel to name a few, would be considered failed governments.

It benefits Democrat and Republican politicians to maintain the two-party system, and to successfully do this requires our tacit compliance. We have abdicated our power and bought into the myth that we should ‘hold our noses’ and vote for the lesser of two evils. But, how can one be more evil than the other when both occupy a stratum of wealth and power from which the majority of Americans are excluded?

Why does the media promote and the majority of Americans accept the fallacy that their vote is wasted when cast for Gary Johnson, a former governor of New Mexico, and Bill Weld the former Republican governor of Massachusetts? Why, is the Johnson-Weld ticket considered a non-viable solution when their policy, politics, and economic approach are based on fiscal austerity, a foreign policy of non-intervention, and a pledge to implement zero corporate taxes to encourage job creation?

Why wouldn’t Americans do everything possible to support candidates who believes in the elimination of income tax which disproportionately disadvantages wage earners to the benefit of businesses that use loopholes to lessen their tax liability? These are all questions which require serious consideration within the context of what policies and which candidates would best serve the interests of the majority.

Many will not vote for Trump because he is a bigot. Many will vote for Hillary because she is a woman. If she wins, she will break the highest ‘glass ceiling,’ and like President Obama, this will represent another social paradigm shift, but not much else.