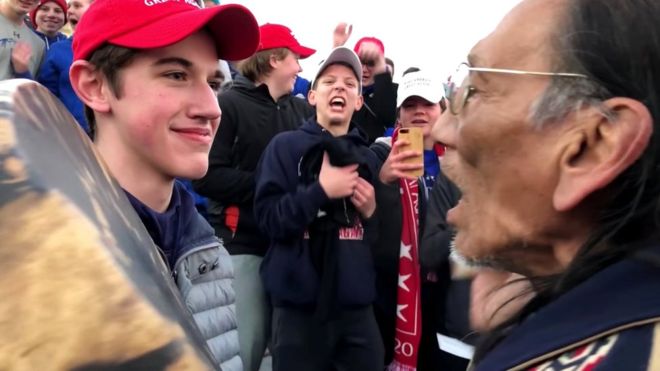 There's plenty of blame to go around for what happened at the Lincoln Memorial this weekend. Photo Credit: Kaya Taitano/Social Media/Reuters

Such an event happened this weekend in front of the Lincoln Memorial in Washington, DC.  There was an incident involving a group of students from Covington Catholic High School in Kentucky, a group of black men identifying themselves as members of the Hebrew Israelites, and others participating in the Indigenous Peoples Rally.

Needless to say, there was a lot going on.  Unfortunately, someone took a snippet home-movie type video and presented it as young white men from the high school getting into the face of an activist Native American as a racist act.  Notably, the young man was wearing a MAGA hat, which in some circles, identified him immediately as a racist Trump supporter and capable of doing all sorts of wrong.

Once posted on social media, the story was picked up by news services and immediately went viral.  Only, the snippet was taken out of context, and as the whole story came out in the following 24 hours, the situation was at least very different than what has been portrayed, and at worst flat out wrong.

But during the interval, thousands upon thousands weighed in on social media, on TV talk shows, and all forms of correspondence, condemning the young men for their actions.  Even after the longer video came out, showing a different narrative from the shorter video, some still cling to the knee-jerk reaction that prompted the outrage, refusing to view it from another vantage point.

Most news outlets have at least walked back their initial comments, somewhat conceding they were off just a bit at first, but the toothpaste can’t be put back in the tube.  Thousands of angry people, convinced that what they had seen, hurled insults, threats and a few even called for acts of violence against the Covington Catholic students.

Activists, wishing to promote their own agenda, are partly to blame.  News organizations, wanting to scoop the others and willing to accept as fact the initial video without back checking and using credible journalistic integrity, are also to blame.  Celebrities, politicians, and angry social media posters also share some of the responsibility.  All well within their First Amendment rights, although some clearly crossed the line of decency and fairness.

Editorial boards of all news organizations should be sitting down with their staffs today and discussing this incident, and a good many others like it.  Why?  Because it’s just a matter time before some lunatic zealot who sees one of these out-of-context videos or statements on Twitter or Facebook, that has been posted or re-posted by a seemingly credible news organization, and commits an act of violence against an innocent person.

It’s bad enough to ruin a young person’s life with these types of actions, but to actually incite someone to take someone’s life, or the lives of their family members is unforgivable.

Maybe it won’t happen this time.  But what about the next?  Is the joy of 15 minutes of fame worth the cost of destroying an innocent person?  What if next time, it’s you?

It’s good that some of the news agencies are walking back their allegations, and even apologizing.  But as we tell our kids sometimes, sorry don’t fix it. Let’s get control of this before it becomes too late to apologize.