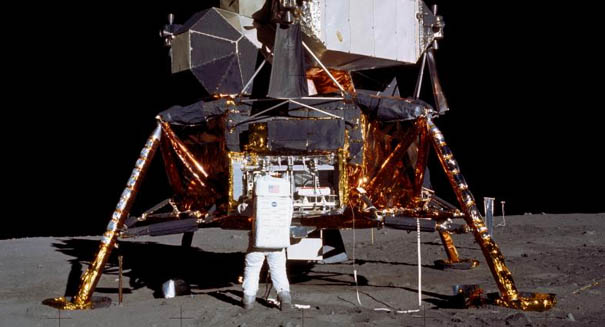 The omission of the planting of the American flag on the moon in a movie is just another attempt to re-write history.

When I heard on the news some conservatives were upset because the new movie, First Man, left out the planting of the American flag on the moon, I just kind of flipped it off as just another Hollywood revision of actual history that would be soon forgotten.

And it’s likely, no matter how good the movie may be and how popular it gets over the next few weeks, by this time next year, it will probably be streaming for free on one of the services, or you can get a DVD from the $5 bin at Walmart.

And the flap over the omission of the flag planting won’t last nearly that long, dropping off the radar as soon as the next “big story” breaks.  But the remarks from Ryan Gosling, who portrays Neil Armstrong, the actual first man to step on the moon, defending the decision to leave that moment out, said the moon landing “transcended countries and borders,” and “was widely regarded in the end as a human achievement.”

Well, for those of us who were alive at the time and remember the Cold War and the Space Race very well, it was pretty much viewed as an American accomplishment, with little to no input from the rest of the world.   Younger generations haven’t lived through a period like the Cold War, and the threat, real or perceived, of Communist aggression throughout the world.

The fear was real at the time, that the Soviet Union had designs on world domination and the spread of Communistic ideals across the globe, including the Western Hemisphere.  Their attempt to place offensive weapons in Cuba, fully capable of reaching almost any city in the US only enforced that fear.

The fear was also real that Soviets would attempt to claim what we then called Outer Space for themselves, and even President John Kennedy felt the Space Race was so important, he pledged to put an American man on the moon within the decade of the 60s.

The American flag on the moon was to show the world that American technology and expertise was sufficient to support the idea of freedom and democracy in the face of an advancing Communist agenda.

But, the more concerning issue about the omission of the American flag on the moon is the fact that is just another attempt at revising history.  Regardless of how we may perceive the race to the moon today, it is a fact of history that it was an American accomplishment.  And an accomplishment that made American citizens’ and patriots’ hearts swell with pride for their country.

Attempts to re-write history from what actually happened to what we wish would have happened do a great disservice to those who need to know the truth about American history, warts, blemishes and all.  America hasn’t done everything right or politically correct.  But America has been a force for good around the world on more occasions than not, and we shouldn’t be ashamed to admit it.

Are there things in our nation’s past that we would like to have seen handled a different way?  Of course, but omitting them or re-writing them won’t change the fact that they happened.  It may, however, allow for the possibility that they may happen again.

I look forward to seeing the movie.  But, I am concerned that too many will see a movie “based on a true story” as an historical document instead of entertainment.

What a shame that would be.