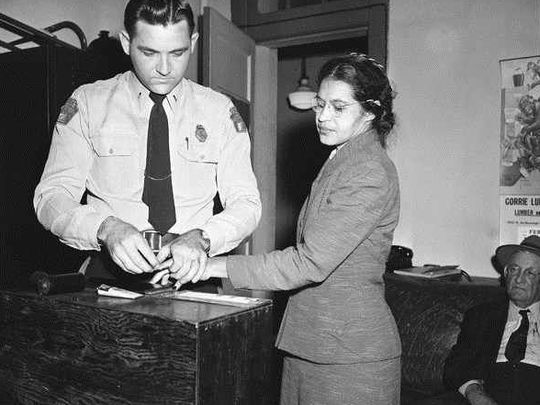 "No, the only tired I was, was tired of giving in." ~Rosa Parks

The 2017 Special Election for Alabama’s U.S. Senate seat vacated by Jeff Sessions, upon his appointment to U.S. Attorney General, has brought so much of the past to the present. Since July, political ads have flooded Alabama airwaves, and politicians, mainly Republican, have made several public appearances that have become national news. From Donald Trump’s “sons of bitches” statement in Huntsville at a Luther Strange rally, to Steve Bannon’s early endorsement of the already controversial Republican candidate Roy Moore, this election is a reminder that this nation’s history of white supremacy is more present than past. And while many outside the state view this ousting as positive, this sort of attention can potentially be a dagger in the cause for justice if attention to detail is not taken. Recognizing politics in Alabama is not the same as politics in other parts of the South, Midwest, Atlantic, or West Coast is a detail that cannot be ignored.

On November 29, 2017, the New York Times published an article  about the influence of the “Black vote” in this important Senate race. In the article, the author clearly displayed his disconnect from Alabama politics through broad generalizations and attempts to seek answers in all the wrong places. There are nuanced cultural factors that if overlooked, could yield results counter to those intended. As an Alabama voter, and civic minded citizen with a broad understanding of the state’s culture, such framing causes defensiveness or hopelessness (depending on an individual’s side of the spectrum), among those who could turn the tide.

And while most of the nation’s attention has been focused on the misdeeds of the Republican candidate, recent political history, specifically the 2016 Presidential Election, shows that energy flows where attention goes. Placing all the media attention (whether social or journalistic) on the absurdities, without supporting the candidate seen as viable often yields the opposite desired result. Even if well intentioned and factual, simply using one’s energy to share news stories exclusively focusing on Doug Jones’ opponent as a means of upsetting the system is misguided at best, and counterproductive at worst. Doug Jones has been a champion of justice, and this fact cannot be overstated and should not be overlooked.

As we move through this season of social change, looking back at past political successes becomes a major key. In December 1955, one of the greatest shifts through public action occurred in the state of Alabama with the Montgomery Bus Boycott. This grassroots movement, largely organized by politically active Black women in Montgomery, illustrates the importance of nuanced action specific to the landscape. The one-day boycott was to take place on December 5, 1955, but due to the groundswell of support, community leaders decided to continue the protest, and chose Dr. Martin Luther King, Jr. to be the leader.

In his book, Stride Toward Freedom (Harper Collins, 1958), a memoir of the Montgomery Bus Boycott, Dr. King sites several historic observations related to political movements and the acquisition of justice. Within the chapter, “Pilgrimage to Nonviolence”, King delves into justice and the journey towards its attainment from a spiritual lens, offering lessons that are as relevant today as they were 60 years ago. The following four points are social, psychological, political, and spiritual guideposts extracted from this chapter, specific to this season in the Heart of Dixie.

“Man is not made for the state; the state is made for man.”

During the 2016-2017 NFL Season, the San Francisco 49ers quarterback Colin Kaepernick began a social justice protest bringing attention to state sanctioned murders of Black men, women, and children at the hands of local police officers around the country. Initially, his protest involved sitting during the national anthem, but after meeting with members of the military, he was advised that kneeling would be more appropriate. While this action led to Kaepernick being blacklisted during the 2017-2018 football season, the protest he initiated continued, with players around the league kneeling to bring attention to social justice issues.

On a campaign stop in Huntsville, AL for then Alabama Senate Primary candidate Luther Strange, Donald Trump professed his allegiance to the state and not the people when he said, “Wouldn’t you love to see one of these NFL owners, when somebody disrespects our flag, to say, ‘Get that son of a bitch off the field right now. Out. He’s fired. He’s fired!’”

The intent behind these words is in direct opposition to the realization of freedom. Dr. King’s prompt that the state was designed for the people and not vice versa is an important claim in the journey towards justice.

“The inseparable twin of racial injustice is economic injustice.”

The United States of America was founded on a system of oppression that pitted the disenfranchised against the disenfranchised; a system that remains in place today. For generations, economic anxiety among White people has been used to fuel negative feelings towards non-white people and immigrants. These attitudes frequently lead poor and working class White people to vote against their own best interests furthering systems of oppression for others, and themselves.

Part of Dr. King’s activist successes in the state of Alabama were achieved because he understood this fact. And in today’s political climate, this understanding is a tool that can propel the movement for justice forward.

“Resistance must be directed towards forces of evil and systems rather than people who happen to be doing the evil.”

I was a baby in the 80s and a teenager in the 90s. Throughout my life, many politicians have passed through local, state, and national offices. And as people have come and gone, corruption and disenfranchisement have remained. Many of the ills that are plaguing our nation are generations in the making, and based on malevolent intentions set by individuals who are dead and gone.

Let’s not give Trump all the credit. He is simply the current driver, not the engineer or architect of this white supremacist system. Racial justice requires the focus be placed on systems and not people.

“History is ultimately guided by spirit not matter.”

Merriam-Webster’s defines spirit as “the immaterial intelligent or sentient part of a person.” Dr. King’s assertion that history itself is beyond the physical, and is a function of energy is both provocative and progressive. It is also a reminder that faith and hope are powerful tools that have been at the helm of great social and political shifts throughout history.

Those pushing the political and social culture forward should keep in mind the bow of justice is long, and energy is a tool that is at our constant disposal. Those on the right side of justice typically have fewer tangible resources and less external power than their opposition, but in battle, they achieve the impossible. This is a function of the sentient part of a person, and ultimately the instrument that shapes history.