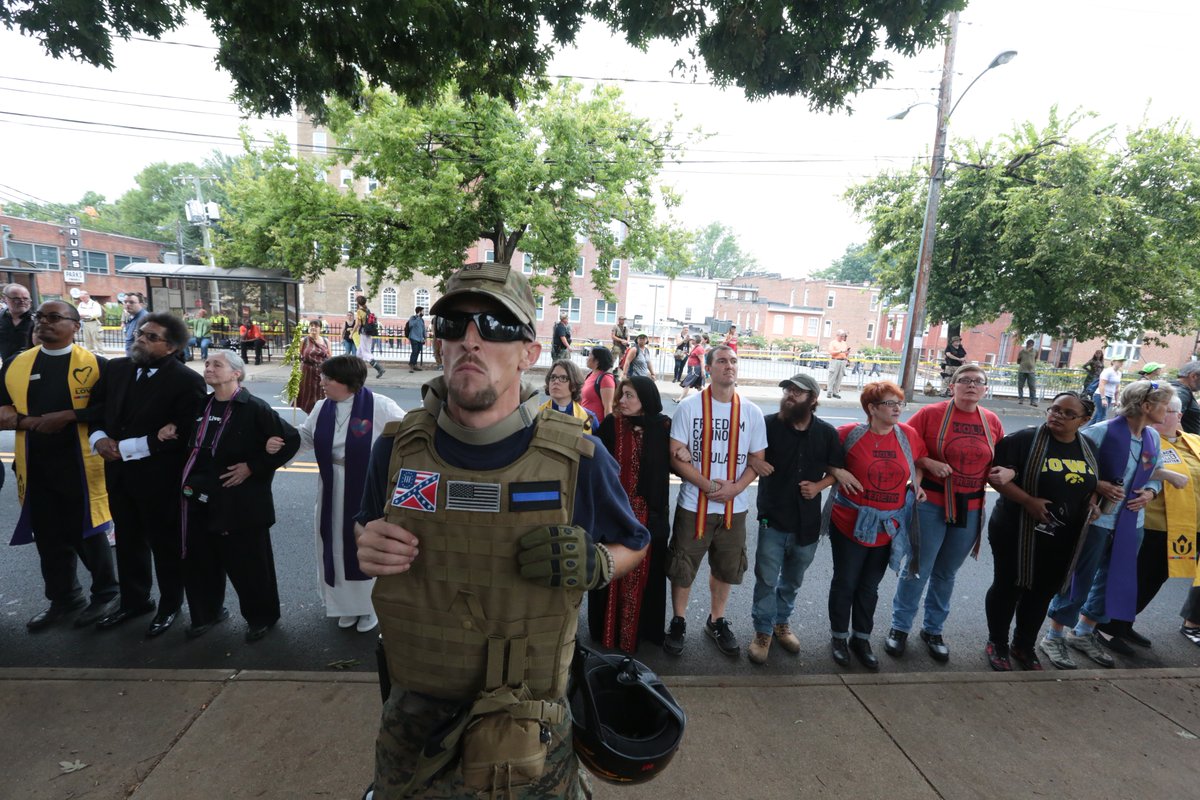 "Dear friends, do not believe every spirit, but test the spirits to see whether they are from God, because many false prophets have gone out into the world." ~I John 4:1

As the 21st century civil rights movement comes into full swing, as punctuated by the white supremacist led rallies and attacks in Charlottesville, religious leaders are splitting into two groups; those who believe their faith obligates their active resistance to discrimination and those who do not. Within the former, clergy throughout the country are actively uniting and learning nonviolent tactics to confront white supremacy head on, as with Congregate Cville. Congregate Cville is a group that organized midsummer 2017, and met in Charlottesville, VA on August 11th and 12th to offer prayer and act as beacons of peace. Among the latter, white evangelicals are the most vocal proponents, frequently expressing views that embolden white supremacists. They are also the 45th President’s most loyal supporters.

According to the National Association of Evangelicals (NAE), evangelicalism highly regards obedience to the Bible; believes others should commit to following Jesus’ example; and uses missionary efforts to push social reform. These tenets make the overwhelming support white evangelicals continue to express for the President somewhat perplexing. According to a Public Religion Research Institute (PRRI) poll taken in August 2017, two-thirds (65%) of white Evangelicals had a favorable view of Trump, as compared to 38% of Americans across groups.

Although this nation was founded under the guise of religious freedom, “with liberty and justice for all”, Christianity has been used as a weapon to propagate white supremacy for centuries, from forbidding the teaching of the book of Exodus to using Ephesians 6:5 as an oppressive tool. These are the roots of white evangelicalism, and like their ancestors, many continue using religion as a device to silence and oppress.

The following four scriptures were foundational to Jesus’ philosophy, and suggest that in their unwavering support of the President, white evangelicals are out of step with the very teachings they claim to promote.

“I needed clothes and you clothed me, I was sick and you looked after me, I was in prison and you came to visit me.” Matthew 25:36 (NIV)

In the short tenure of this administration, the President has shown little regard for the sick, poor, and imprisoned. From his initial desire to eliminate health care coverage for millions to his support of excessive force by police, he has proven to be compassionless. Despite these facts, the support white evangelicals have for the President has remained steadfast.

“Do not judge, or you too will be judged. For in the same way you judge others, you will be judged, and with the measure you use, it will be measured to you. ‘Why do you look at the speck of sawdust in your brother’s eye and pay no attention to the plank in your own eye?’” Matthew: 7:1-3 (NIV)

The Nashville Statement, a manifesto-type document released online by self-proclaimed Evangelical Christians on August 29, 2017, consists of 14 articles that are said to describe, “what it means to be a human being”. Yet the majority of the document focuses on “sexual immorality,” shaming, and delegitimizing individuals identifying as LGBTQ. Interestingly, much of the “sexual immorality” eluded to in the Nashville Statement turns a blind eye to the life choices of Trump, whom 77% of evangelicals supported in the 2016 Presidential Election.

“The second is this: ‘Love your neighbor as yourself.’ There is no commandment greater than these.” Mark: 12:31 (NIV)

Love is regarded as the greatest commandment throughout the New Testament of the Bible. Practicing love requires compassion and deep regard for another. The President’s response to events in Charlottesville, which resulted in the murder of a peaceful protester, was loveless and showed no compassion. Within days, A.R. Bernard, pastor of New York City’s Christian Cultural Center, resigned from Trump’s evangelical advisory board. In his official statement following the President’s remarks on this national tragedy, the pastor stated, “It became obvious that there was a deepening conflict in values between myself and the administration.” In the weeks since, the President’s statements have become more aligned with white supremacists, yet to date, Pastor Bernard is the only evangelical advisory board member to resign.

“Learn to do right; seek justice. Defend the oppressed. Take up the cause of the fatherless; plead the case of the widow.” ~Isaiah 1:17 (NIV)

Throughout his time on Earth, Jesus embodied justice and truth. He loved everyone, and displayed this love by doing right by everyone. He defended the oppressed, and left us with a message of empowerment reminding us we too have limitless power. The current President has made it clear; his agenda involves none of the above. Upon entering office, Trump began enacting executive orders and taking steps that oppress the oppressed. He has exhibited little to no care for the fatherless and widowed, and in some cases has even perpetuated the actions that led to these losses. Through a myriad of tweets, pressers, and even the pardoning of Joe Arpaio, he has ensured his desire to continue turning his back on those mentioned in Isaiah 1:17, punctuated by overtly discriminatory speeches and acts.

Throughout the month of August, the obligations of religious leaders and the role of the church in these turbulent times have been called into question, just ask Joel Osteen. We are in the middle of a revolution and the true intentions once veiled have come into full focus. Now is the time for true believers to get real with themselves, their faith, and act accordingly. WWJD?