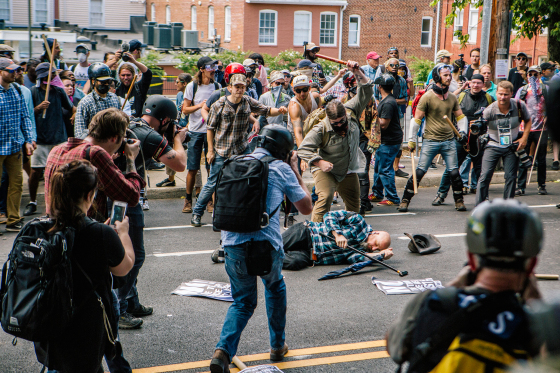 Is this the America we want to show the world? PHOTO CREDIT: Time Magazine Photographed by Mark Abramson

The photo attached to this story was published in the August 28 edition of Time magazine, as part of a series of articles on Hate in America.  There were several pictures accompanying the stories, but this particular one was a two-page spread, showing a man lying on a street being beaten with a wooden stick.

Having the magazine spread out before me, I turned the page to this photo. I must have looked at this picture for a good 30 minutes.  And the more I stared at the photograph, the more I saw.

The caption for the photo reads, “STREET FIGHTS– As police tried to clear the streets on Aug. 12, counterprotesters beat protesters in Charlottesville.”

Tell me again what kind of nation we have become, as the first thing I noticed was the number of people taking pictures and/or videos of a man being brutally beaten with a wooden stick on a public street.  I can count at least eight cameras trained on the incident, and none of them appear to be attempting to stop this violent act or come to the defense of the man lying on the asphalt.

I don’t know what happened to provoke the attack, but the man being beaten has a walking stick and an umbrella in his hands and doesn’t appear to be all that menacing.  Are we so desensitized to violent acts that taking photos and videos of people in danger for profit or social media attention that we stand by and allow someone to be mortally injured or killed?

Tell me again what kind of a man continues to pound a helpless man on the ground, who has his eyes closed and is not even trying to defend himself?  The one doing the beating has what appears to be a black mask over his face, and his arm raised to strike the man again with the club.  Seems a very angry pose to me, but I wasn’t there.

Tell me again, what gives any human being the right to pound another with a wooden club?  If he was alt-right or even a Nazi sympathizer, or simply someone walking home and was caught in the wrong place, does that give any of us the authority to beat a man into submission for his beliefs?  Does that happen in America?  Some wishing to come to America to escape persecution in their own countries may think twice after seeing that picture.  They may ask, “Will I be any better off in America?”

Tell me again how the counter-protesters were goaded into violent acts by the White Supremacists.  Those I see in this picture are armed with sticks, clothed in arm and leg padding, wearing masks and helmets.  This is not how you dress when you go to conduct a peaceful protest.

And tell me one more time, where did these peaceful counter-protesters get this equipment?  Did they have it hanging in their suburban garages, next to their lawn trimmers and barbecue grills?  Or maybe they just came from a street hockey game and didn’t have time to change.

Tell me one more time there wasn’t hate “on many sides” involved in the situation that unfolded in Charlottesville.  Tell me again why Charlottesville and even federal authorities are not looking at these photos and videos to identify those who committed such heinous and violent acts and charging them with assault?

And tell me again that White Supremacists, or any other group for that matter, got what they deserved for promoting hate speech and violence.  And while you are at it, tell me who gets to decide who gets beaten and who doesn’t.

And tell me again, how we can treat each other this way.  Because I don’t understand.