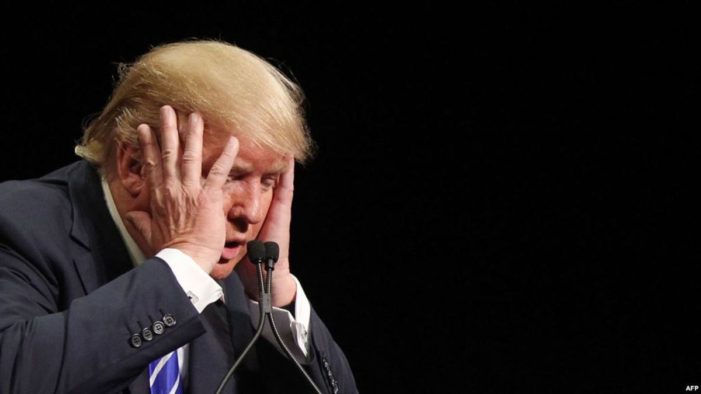 There’s a brand new push on to force Donald Trump from office – and it’s not by way of impeachment.  Instead, a growing number of Trump critics are hoping to invoke Section 4 of the 25th amendment to the Constitution which allows a majority of the cabinet, plus the vice-president, to declare a president mentally or emotionally “unfit” to serve.

Under Section 4, Trump could be removed from office and replaced by Vice-president Mike Pence, who would serve out the remainder of his term.

Like full impeachment, it’s never actually happened, of course.  When the 25th amendment passed a half century ago — in the aftermath of the assassination of JFK — its framers were largely thinking about what to do in the event of the president’s death — or his incapacitation by way of physical illness.

But constitutional scholars say there is no inherent reason why the 25th amendment cannot be applied to mental or emotional illness, or to any condition, in fact, that might render the president “unable to discharge the responsibilities of his office,” according to the amendment’s language.

“Illness,” in short, is in the eye of the beholder, and if sufficient numbers of a president’s cabinet, in addition to his VP, become convinced that the president is too erratic, unstable or dangerous to leave in the White House, they can notify Congress of their finding, beginning the process of removal.

But that’s just the beginning.  Under the amendment, the president then has four days to declare his continued “fitness” to serve in office, nullifying the initial finding of his cabinet and VP.  At that point, the same majority constituency can reiterate its original finding — and the matter is put to a floor vote in the Congress.

But the bar is high.  Fully two thirds of both the House and Senate would have to vote to have the president removed.  If the president survives that vote, he continues to serve out his term.  And there the matter rests.

Given these stipulations, is it realistic to expect Trump to be removed via the 25th amendment?  Some independent political analysts like Ross Douthat of the New York Times think that it is, citing a growing number of incidents involving Trump that they believe genuinely call into question his mental state.  And the complaints do not just involve Democrats, or Trump’s traditional antagonists in the media.

Veteran columnist George Will and a growing number of other Republicans, including GOP Senate majority leader Mitch McConnell, who has been feuding with the president for weeks, have also begun raising questions about Trump’s “fitness” to lead his party, as well as the nation.

And in the wake of Charlottesville, the momentum is clearly growing.  Earlier this week, following Trump’s rally in Phoenix, in which the president went on a tirade against the mainstream media, James Clapper, who served in top intelligence jobs under Democratic and Republican presidents alike, also questioned Trump’s mental stability, calling Trump’s behavior “downright scary and disturbing.”

“In a fit of pique if he decides to do something about [North Korea’s] Kim Jong Un, there’s actually very little to stop him,” Clapper told CNN.  “The whole system is built to ensure rapid response if necessary. So there’s very little in the way of controls over exercising a nuclear option, which is pretty damn scary.”

Psychiatrists, who usually refuse to make public diagnoses about the mental states of public figures, especially presidents, have also begun to weigh in.  And some are going even further.  One, Bandy Lee, is consulting with Democratic members of Congress about setting up an expert panel to advise Congress about Trump’s mental health – a preliminary step toward invoking the 25th amendment.

Lee, who said she is speaking out because of Trump’s “dangerousness,” edited the upcoming book The Dangerous Case of Donald Trump, to which 27 mental health professionals contributed.

Another psychiatrist Allen Frances, is coming out next month with his own book, Twilight of American Sanity: A Psychiatrist Analyzes the Age of Trump, in which he suggests that the president is suffering from narcissistic personality disorder, a recognized mental illness.

Is Trump really that vulnerable to ouster?  Probably not, at least not right now.  It would likely take an extraordinary incident involving Trump to push VP Pence or members of Trump’s cabinet to invoke the 25th amendment.  And Trump seems to be hedging against such a possibility by constantly stoking support from his base.

Polls show that a hefty majority of Republicans – 75% or more – still support the president, warts and all.   And Trump’s latest bow to his generals in Afghanistan has shored up support in his cabinet.  Most are Trumps appointees anyway, and exhibit strong loyalty to the president.

But like impeachment, simply airing the possibility of invoking the 25th amendment does increase the “thinkability” of removing Trump before his term is up.  And should the president’s agenda stall, and the economy, now robust, face a downturn, and should the Democrats regain control of the House in 2018, tolerance and patience for Trump within his own party could suddenly vanish.

In fact, it might not take more than a couple of top-level defections from his cabinet, and a call for his removal by McConnell, to get the ball rolling.