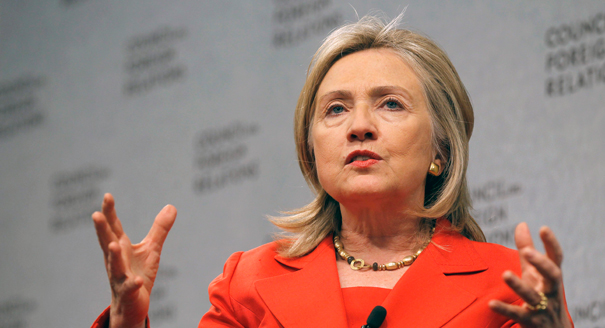 Devoid of national leaders, and confident of a Trump crash, Democrats may turn to a "restorationist" Clinton candidacy.

Hillary Clinton is pushing 70 and has suffered through two disastrous – and humiliating — presidential runs.  In each, she was projected as invincible, only to be upstaged by insurgents with more charisma and a clearer message.   In 2016, she managed to overcome a fierce challenge from Bernie Sanders, much like the one from Barack Obama that vanquished her in 2008.  But having cracked another glass ceiling for women in politics, she faltered badly against a bombastic neophyte with consistently worse approval ratings than her own.

So why hasn’t the former First Lady gone gently into the night?  Because she’s Hillary Clinton, of course.   The last quarter century of her life — even longer, in fact — has been devoted to promoting her husband to the presidency and then herself, following closely in his footsteps.  Most sober observers know that Fate or Karma intervened, and may have already had the last word — but not Hillary.  She doesn’t blame her successive defeats on her stars but on earthly influences – the Russians, the FBI, Wikileaks, the media, sexism, and of course, a “vast right-wing conspiracy” that has haunted her and Bubba for decades.

Hillary’s grief over her recent loss is deep and palpable, friends say.   But she’s already begun to re-group.  She’s mulling her options, and even testing the waters.  It may seem inconceivable to some, especially her political critics, but guess what:  It’s entirely possible that Hillary Clinton will run for the presidency again.

There are some early signs and maneuverings.  Clinton’s just announced that she’s not returning to the Clinton Foundation which proved to be a huge political albatross during her recent presidential run.  That’s a smart move if she plans to try again.  In January, she floated a trial balloon:  She might run for New York City mayor.  She’s been attached to the state ever since she served as its two-term senator, of course.  And for a while at least, it looked like current Democratic incumbent, Bill DeBlasio, might be in real political trouble, giving her an opening.

Being the mayor of New York isn’t like being mayor anywhere else in America.  You’re an out-sized presence not only domestically but internationally.  And there’s something else:  New York is Trump Town, where the former reality TV star built up his real estate empire. As one of the city’s most visible socialites, he befriended Hilly and Bill and donated considerable sums to their respective campaigns. The idea of being back in Trump’s backyard, doing her best to upstage his presidency and also wreak havoc on his business operations, must have been mighty tempting for a woman with the kind of grudge that she now, perhaps rightly, harbors.

But the balloon burst:  DeBlasio, though still under a cloud, will weather the storm.  And it turns out that most New Yorkers, and even many Democrats, according to polls, don’t want Clinton back.  No matter, the New York mayoralty is too small for her anyway – and everyone knows it.  Given her ambitions, it’s at best a consolation prize, and besides, Hillary is no city manager-type.  In theory, she could wait and run for governor but with a sitting Democrat, Andrew Cuomo, firmly ensconced in the statehouse, with no plans to leave, there’s no opening there, either.  And without a Democratic president, she would never be named to the Supreme Court.

So, in a funny way, the only remaining option for Clinton may well be to stand for the presidency again.

Why would the nation feel any differently than New Yorkers do?  It might not, actually, but Hillary’s support base is as rabid as it ever was.  Her former campaign manager Robby Mook, humiliated alongside Hillary last November and anxious for redemption, thinks it’s totally doable, of course.  Recently elected DNC chair Tom Perez, Obama’s former labor secretary, who was vetted as a possible VP for Hillary in 2016, also says he would welcome a third Clinton candidacy.

Most Democrats still believe that Clinton “won” the 2016 election, with an unprecedented 2.9 million popular vote margin. Sure, she was a deeply flawed candidate, but now that people have gotten a closer look at Trump, won’t buyer’s remorse make her a shoo-in?

The fact is, despite a bevy of rising young stars, the Democratic Party has no unifying leader of Clinton’s stature waiting in the wings – and they know it.  Elizabeth Warren, who might have made a fine running mate for Joe Biden had the former VP overcome his reluctance to run, lacks Clinton’s centrist appeal.  And Cuomo, heir to another mini-dynasty, has  alienated organized labor by slashing public sector worker benefits.  One possible long-shot is Kirsten Gillibrand, who even looks and sounds like a wan version of Hillary, but is virtually unknown outside of New York.

Clinton will be 73 in 2020, older than Ronald Reagan was, but to her supporters, not too old to be President. And besides, Trump will be 74.  For now, Hillary’s likely to keep up a low-level presence, speaking at selected engagements on key issues.  But this fall, as campaigning for the 2018 mid-term elections approach, and as the nation’s politics become polarized ever more sharply around Trump’s beleaguered presidency, expect Clinton’s support base to re-emerge, Phoenix-like, to push her to reclaim her “lost” throne.