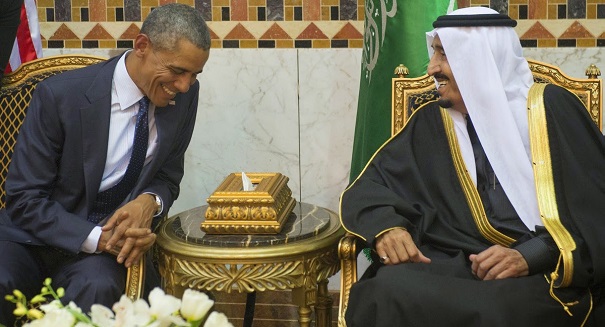 Saudi Arabia has spent hundreds of millions of dollars if not much more, planting the seeds of Wahhabism and terrorism throughout the world. King Salman played a major role.

As the beheading of Saudi Arabian nationals continue, some are looking closer into King Salman and the Saudi Royal family’s role in the beheading of countless civilians at the hands of ISIS. Only days after President Obama met with the new Saudi King to discuss shared interests, a video surfaced of the Islamic State’s newest victim, Jordanian Lt. Muath Al-Kaseasbeh.

ISIS burned Al-Kaseasbeh alive in a cage, and on Tuesday, the video was released.  It is just one of many disturbing recordings which show the savagery of ISIS. While President Obama discussed human rights with new Saudi King Salman, the American public discussed oil prices in the wake of Saudi leadership change. However, the real story is King Salman’s direct support of 9/11 hijackers, and the overlooked theme of Saudi oil turned into blood money.

In the aftermath of the World Trade Center attacks, U.S. forces struck targets in Afghanistan and launched a global manhunt for Saudi-born Osama Bin Laden. Fifteen of the 19 hijackers on 9/11 were Saudi Arabian, but all of the public’s attention focused on Afghanistan.

Two of the hijackers chosen by Bin Laden after fighting alongside him in Bosnia, Khalid Al-Mihdhar and Nawaf Al-Hazmi were the focus of a lawsuit filed by families of 9/11 victims, who claim Saudi national Omar al-Bayoumi financially supported the two men as they planned the attacks. The lawsuit claims to have evidence that al-Bayoumi was a Saudi intelligence agent, directly supporting the terrorists.

A report detailed by Washington’s Blog delves into King Salman’s direct support of Al-Qaeda. “According to a United Nations-sponsored investigation, Salman in the 1990s transferred more than $120 million from commission accounts under his control — as well as his own personal accounts — to the Third World Relief Agency, another al-Qaida front and the main pipeline for illegal weapons shipments to al-Qaida fighters in the Balkans.”

The report, supported by claims from former NSA and CIA operatives, paints King Salman as a primary financier of al-Qaeda operations leading up to 9/11, using charities as a front to filter funds to the terrorist organization. King Salman headed the Saudi High Commission, which is named as a leading supporter of al-Qaeda and Bin Laden in Bosnia, the charity is also named in the lawsuit filed by the families 9/11 victims as a direct financier of the terrorist plot to kill Americans.

Terrorism is nothing new to the Saudi Royal family. Wahhabism, the national religion of Saudi Arabia, is the root of fundamental Islamic extremism. In the 1970’s at the peak of Saudi oil-market domination, Saudi charities financed Wahhabi mosques and schools all over the world. At the core of Wahhabism is the belief that only those who adhere to Wahhabi belief will go to Heaven, and that all other Muslims, Christians, Jews, or non-believers will burn.

The accepted faith of the Taliban is Wahhabism, the accepted faith of ISIS is Wahhabism. Hillary Clinton herself noted the Saudi Royal family were reluctant to stop funding the Wahhabi Taliban when pressured. In a memo leaked by Wikileaks Clinton noted, “While the Kingdom of Saudi Arabia (KSA) takes seriously the threat of terrorism within Saudi Arabia, it has been an ongoing challenge to persuade Saudi officials to treat terrorist financing emanating from Saudi Arabia as a strategic priority.”

Clinton seems to downplay the seriousness of the Kingdom of Saudi Arabia’s financing of global terror, while America fights the Global War on Terrorism. There is a clear connection between Wahhabism and violent extremism, and a clear effort by Saudi Arabian royalty to spread Wahhabism, but no public outcry to sever relations with Saudi Arabia. There are no popular calls by American government officials for sanctions, like those raised against Iran. There has been no military operation as was seen in Afghanistan or Iraq, though time and time again, the root of Islamic terrorism begins in Saudi Arabia.

Through King Salman’s financing of al-Qaeda, and the Saudi spread of Wahhabism, ISIS has become a major threat to Middle Eastern and global stability. In the ashes of American intervention in Iraq, Syria, and Libya, The Islamic State has sprouted, taking advantage of regions destabilized by war. In the lifeline of Islamic terrorism, ISIS looks like a relatively new threat, which begs Americans to wonder where the organization’s financial stability comes from.

One of the major issues facing America throughout the War on Terror is how to control where U.S. funds are appropriated, and make sure American taxpayers are not funding their own demise. In Afghanistan, this problem became too familiar, with Afghan contractors skimming money from the U.S. government and funneling it directly to the Taliban. In a Reuters article from 2009 one anonymous individual claims to have supplied the Taliban with $200,000 a month, directly taken from U.S. contract money. That is $2.4 million a year from one contractor.

In November 2014, Newsweek published an article detailing how ISIS funds their operation in multiple countries, most notably Iraq, Syria, and Libya. Almost immediately, the article names Saudi Arabia as a fundamental source of money for ISIS. Between Saudi oil-money and misappropriated money, ISIS has the financial ability to sustain their territorial grabs across the Middle East while growing as a threat to the U.S. and allies.

For 2015, $470 million in U.S. foreign aid has been requested for Libya, Syria, and Iraq. With all three countries ceding large portions of their territory to ISIS in the past two years, it is impossible to know how much of U.S. tax money will end up in the pockets of the world’s biggest terror threat. The U.N. is publicly concerned with reports that ISIS is receiving food intended for innocents who need the rations in war-torn Syria.

ISIS seems like a new entity, but it is not, nor some group that simply stumbled across major funding. In retaliation for ISIS burning Lt. Muath Al-Kaseasbeh alive Tuesday, Jordan executed two ISIS prisoners this morning, one of which, Ziad Karbouli, formally served under Abu Musab al-Zarqawi, deceased leader of Al-Qaeda. The roots of terror run deep through the blood-soaked soil of holy lands.

Before becoming known globally as the leader of Al-Qaeda and top U.S. military target, al-Zarqawi started ISIS in Iraq. This Stanford report describes the beginning of ISIS, then called Jama’at al-Tawhid wa’l Jihad.

The goal of ISIS is to set up a global caliphate, to rule the entire world by their laws, and to convert every living soul to the nationally recognized religion of Saudi Arabia. Saudi Arabia has spent hundreds of millions of dollars if not much more, planting the seeds of Wahhabism and terrorism throughout the world. King Salman played a major role.

Many consider that when President Obama shook hands with King Salman to welcome him into his new position of power, America formally turned a blind eye to King Salman and Saudi Arabia’s policies on positioning their own power: to fund the growth of Al-Qaeda, the 9/11 hijackers themselves, to help spread a secular and intolerant religion throughout the world, and to fund the escalation of global violence in the name of God.