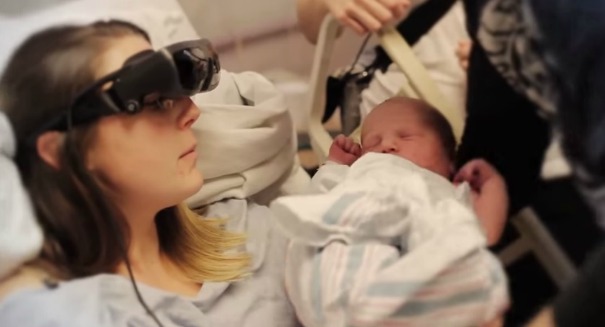 The woman was able to use special glasses provided by a company called eSight that replicates sight for those who are blind.

A woman who has been legally blind since birth was able to see her newborn for the first time using a pair of special glasses in a moment that was captured on video.

Kathy Beitz wanted badly to see her baby on the day she was born, and eSight Corporation, which creates special glasses priced at $15,000 that allows those who are legally blind to see to a certain extent, loaned her glasses for the day, according to a Huffington Post report.

Her older sister Yvonne Felix, who is also blind, uploaded the video. She said she had tried the glasses herself and was able to see her 6-year-old and 2-month-old children, but she was not able to see them when they were first born, and she wanted her sister to have that experience.

The glasses use a camera, display technology, and some advanced computing to create a real-time video that can allow blind people to see. They can even zoom, focus, and alter the image they see depending on what their needs are.

Felix said she was happy that her sister had gotten a chance to do what she couldn’t: see her baby when it was born. She said Beitz had been able to try the glasses on when she was five months pregnant, and that both of them knew she would get to see her baby as soon as the baby was born, and she’d even get to fill out the birth certificate.

Felix has started a funding project called Make Blindness History that attempts to raise money to help people who are legally blind to be able to purchase eSights in order to see their own children.

Now that Beitz has seen her baby, the project will focus on raising money for other people, and they won’t stop until everyone who wants to see is able to use an eSight, Felix wrote on her website.