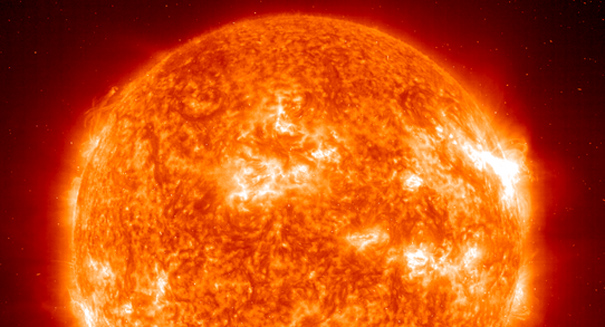 The solar flare came from some intense storms on the sun's surface, which could create more flares in the coming days and some spectacular Northern Lights shows.

The sun recently blasted off a gigantic solar flare recently after days of broiling storms on its surface.

The solar flare was declared an X1.8-class event, which is one of the most powerful flares that the sun is capable of. NASA’s Solar Dynamics Observatory captured the event on camera. It caused strong radio blackouts here on Earth, particularly in Australia, when it struck Friday at 7:28 p.m., according to Christian Science Monitor.

The solar flare erupted from Active Region 2242 on the sun, a sunspot region where more storms are expected that could lead to a Christmas Northern Lights show for some people on Earth these coming days.

Experts expect the storms to cause more minor to moderate radio blackouts, and another strong event is possible. The flare was part of an active week of storms that earlier produced two M-class (moderate) flares, one on Dec. 16 and the other Dec. 18.

Sunspots show up as dark areas of the sun because they are significantly cooler than the rest of the surface, and the house intense magnetic field activity, which causes the spectacular solar flares.

Powerful X-class solar flares can knock out communications and GPS navigation systems when they are aimed at Earth. They can even threaten satellites and astronauts in space and aren’t protected by our atmosphere.

M-class solar flares are just a tenth of the size of X-class flares, and are typically responsible for creating the spectacular auroras we know of as the Northern Lights. With more M-class flares expected, more shows could be coming this weekend.

The sun is on an 11-year space weather cycle that has its own peaks and valleys of activity. It is currently in the peak phase, which it reached in recent years.

Solar flares, which are sudden ejections of energy from the Sun’s surface, are typically equivalent to an astounding 160,000,000,000 megatons of TNT. As a comparison, the bombs dropped on Hiroshima and Nagasaki during World War II combined don’t even come close to even one megaton.

Solar flares are typically followed by what is known as a colossal coronal mass ejection, when the flare blasts electrons, ions, and atoms through the sun’s corona and off into space. It typically takes a day or two to reach the Earth.