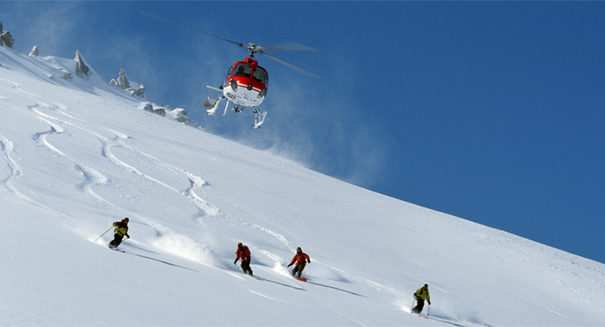 The modern jet setters we see the most of are the ones with expensive hobbies.

Google CEO Alan Eustace surprised the many late last week with his record-shattering skydive from 135,000 feet, and it is easy to imagine that this impressive feat came with an impressive price tag. After all, Eustace needed a professionally engineered space suit for protecting his body in the outer atmosphere, life-sustaining equipment within, and a purpose-built helium balloon without to haul him to his launch altitude.

Eustace represents a trend among today’s most wealthy hobbyists, including Sir Richard Branson and Larry Ellison. Those with the resources can engage in and enjoy the thrill of the world’s most expensive sports. Here are five notable examples.

Anyone who has enjoyed snow skiing knows that it is not a sport one can do on a budget. However, for those who can afford it, like Russian billionaire and Brooklyn Nets owner Mikhail Prokhorov, substituting a private helicopter for the ski lift lets one have access to the most remote, unspoiled parts of the resort mountains where the snow is always the freshest imaginable. Richard Branson is also fond of so-called “heli-skiing.”

Branson, who is the founder of the Virgin Group, is also quite fond of kite-surfing. It happens, actually, the just about any elite hobby one can think of is probably the domain of Richard Branson. Kite-surfing combines riding a surf or wake board with holding onto a parachute for achieving wind-propulsion. In 2012, Branson set a record for being the oldest person to kite-surf across the English Channel.

Competitive sailing is certainly a big-ticket hobby, and Oracle founder Larry Ellison has the billionaire’s resources to enjoy it. His Oracle Team USA currently holds the America’s Cup, the top honor of a well-known high-stakes yacht race that happens every few years. Ellison will likely spend millions to defend the team’s position in 2017.

Of course, there is near the top of the expensive sport list Formula 1 racing. Fast cars are expensive on all levels, but a F1 car can cost millions. And these price tags are no problem for—you guessed it—Richard Branson. Joining him in the pits with their own cars though are Formula 1 CEO Bernie Ecclestone and GoPro founder Nick Woodman.

No list of expensive past times would be complete without horses. Whether it be dressage, racing, or polo, the equestrian sports are perennial favorites of the rich and famous. Former New York City Mayor Michael Bloomberg’s daughter, Georgina, is a professional rider. Elite tech baron Bill Gates will not be left out of the sponsoring of daughters’ horseplay. He reportedly spent nearly $1 million to encourage his daughter’s equestrian adventures.

Perhaps the general public can at least enjoy these affluent athletics vicariously!