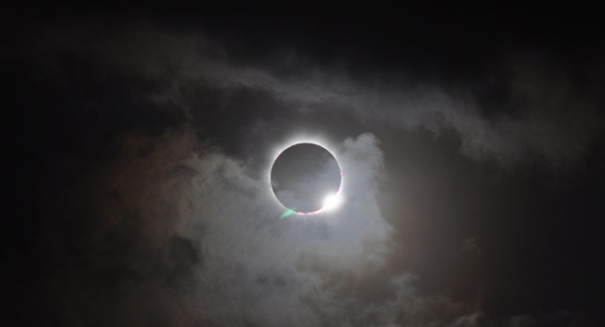 A partial solar eclipse will be visible throughout the majority of the United States on Thursday, excluding New England and Hawaii.

A partial solar eclipse will be visible throughout the majority of the United States on Thursday, excluding New England and Hawaii, the Westside Story reports. As the sun begins its descent, the rising moon will partially block its path.

Partial solar eclipses occur when the moon’s orbit is in the same plane as the sun’s trajectory towards Earth. Most of the time, the moon’s orbit lies north or south of this plane, avoiding the Earth’s perception of the sun’s light.

The best view of this event will be in the northwest, as the maximum eclipse occurs at sunset. On the east coast, the sun will go down before this maximum is reached, although still quite the event.

“Observers in the Central Time zone have the best view because the eclipse is in its maximum phase at sunset,” said Fred Espenak, longtime eclipse expert at NASA. “They will see a fiery crescent sinking below the horizon, dimmed to human visibility by low-hanging clouds and mist.”

While the sun is partially blocked, observing any eclipse can do permanent damage to the eyes. Common sunglasses, additionally, are not adequate protection from staring into the sun. Safe techniques for observing an eclipse are the (possibly homemade) pinhole projection, telescope or binocular projection onto a surface, or specially made solar-filtering sunglasses. Ideas can be found on Sky and Telescope’s website.