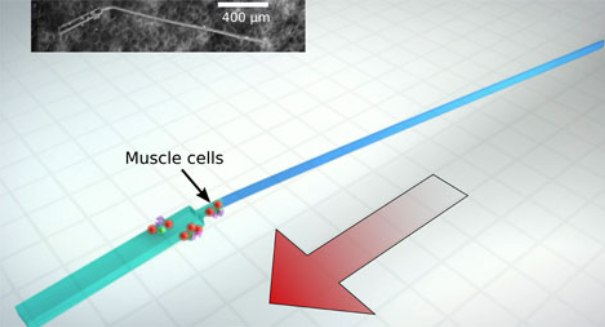 Engineers start by constructing the body of the bio-bot from a flexible polymer.

The University of Illinois at Urbana-Champaign reports that sperm-like self-propelled swimming bio-bots have invaded the alien world of aquatic micro-organisms. The results are published in the journal Nature Communications.

Engineers at the university have developed a class of tiny bio-hybrid robots, the first synthetic structures that can travel through the viscous fluids of biological environments without any outside help.

“Micro-organisms have a whole world that we only glimpse through the microscope,” said Taher Saif, the University of Illinois Gutgsell Professor of mechanical science and engineering. “This is the first time that an engineered system has reached this underworld.”

Engineers modeled the bio-bots after single-celled structures with long tails called flagella. They start by constructing the body of the bio-bot from a flexible polymer. Then they culture heart cells near the junction of the head and the tail. The cells self-align and synchronize to beat together, sending a wave down the tail that sends the bio-bot forward.

Saif noted that engineers have yet to fully understand how the cells communicate with each other on the flexible polymer tail, but they do know that the cells must beat together, in the right alignment, for the tail to work properly.

“It’s the minimal amount of engineering – just a head and a wire,” Saif explained. “Then the cells come in, interact with the structure, and make it functional.”

In addition to one-tailed bots, the engineers also built two-tailed bots, which they found can swim even fast. In the future, they foresee bots that could sense chemicals or light and travel toward a target for medical missions.

“The long-term vision is simple,” remarked Saif. “Could we make elementary structures and seed them with stem cells that would differentiate into smart structures to deliver drugs, perform minimally invasive surgery or target cancer?”

See an animation of the self-propelled bio-bots in motion here.