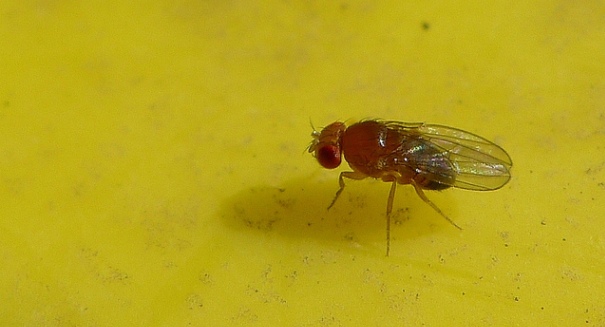 The common fruit fly has a very short life of about 60 days.

A new study, published in Science magazine, examined sexual behavior in fruit flies and its effects on their hormones, life expectancy, and life quality.  Researchers examined the presence of female pheromones in male fruit flies.  They observed that male fruit flies that were effeminized had lower fat stores, had less resistance to starvation, and had an overall shorter life span.  These adverse impacts were reversible with sexual activity and mating behaviors that decreased the perception of female pheromones.

An analysis of the study in BBC News explains that these negative impacts were seen specifically in male fruit flies that were stimulated to mate, but were prevented from doing so.  In contrast, those who were allowed to copulate not only lived longer but suffered less stress.  The flies that were tantalized but denied any action showed more stress, a decrease in their fat-stores and had their lives cut short dramatically.

The common fruit fly has a very short life of about 60 days.  This makes them an ideal organism to study aging as the genes that regulate a fly’s lifespan have been found to closely parallel those in humans.  There are also similar pathways in worms, mice, and primates.  These results will likely hold up across different species, underscoring the importance of sex to health.

Researchers note that animal behavior is driven most by sex and food.  The study indicates that the female holds the power to select the best mate.  As a result of the lack of sex, certain males suffer health consequences and the stronger ones prevail.  This study also indicates how acting upon physiological changes and making behavior adjustments can be critical for an animal’s health and survival.

BBC News also stated that a study in roundworms showed a similar effect in the females of the species.  Where male pheromones were present in the females of the species, they had a shorter lifespan.  Sexual deprivation has been linked to other negative impacts.  Another study published in Science magazine in 2012 found that sexual deprivation in fruit flies also resulted in a higher level of alcohol consumption.