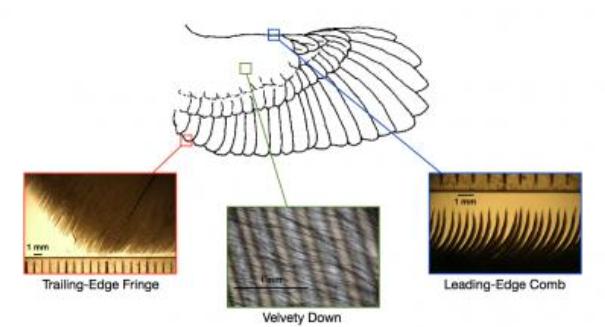 Earlier work by the researchers showed that the porous, flexible nature of the owl wing's trailing edge leads to major aerodynamic noise reductions.

According to a news release from the American Physical Society, owls’ near noiseless wings could lead to stealthier aircraft. For owls, their specialized plumage gives them the ability to hunt and kill their prey in relative silence. Researchers believe that “silent owl technology” could improve the design of aircraft, wind turbines, and submarines.

“Owls possess no fewer than three distinct physical attributes that are thought to contribute to their silent flight capability: a comb of stiff feathers along the leading edge of the wing; a flexible fringe a the trailing edge of the wing; and a soft, downy material distributed on the top of the wing,” noted Justin Jaworski, assistant professor in Lehigh University’s Department of Mechanical Engineering and Mechanics.

For normal wings, the sound from the hard trailing edge usually holds sway over the acoustic signature. However, earlier work by the researchers showed that the porous, flexible nature of the owl wing’s trailing edge leads to major aerodynamic noise reductions.

“We also predicted that the dominant edge-noise source could be effectively eliminated with properly tuned porous or elastic edge properties, which implies that that the noise signature from the wing can then be dictated by otherwise minor noise mechanisms such as the ‘roughness’ of the wing surface,” Jaworski posited.

The velvety down on top of an owl’s wings produces a flexible but rough surface, similar to a soft carpet. According to Jaworski, this material may get rid of sound at the source through a new mechanism that is a lot different than those of normal sound absorbers.

“Our current work predicts the sound resulting from air passing over the downy material, which is idealized as a collection of individual flexible fibers, and how the aerodynamic noise level varies with fiber composition,” Jaworski remarked.

The findings are offering insight into how a fuzzy surface can be formed to modify its acoustic signature.

A photographic examination of actual owl feathers by Ian Clark of Virginia Tech has shown a “forest-like” geometry of the down material. The researchers plan on using these observations to more accurately recreate the down structure in future theoretical and experimental research. Initial work at Virginia Tech revealed that a simple mesh covering is able to get rid of some sound produced by rough surfaces.

“If the noise-reduction mechanism of the owl down can be established, there may be far-reaching implications to the design of novel sound-absorbing liners, the use of flexible roughness to affect trailing-edge noise and vibrations for aircraft and wind turbines, and the mitigation of underwater noise from naval vessels,” Jaworski added.

The study’s results will be presented at the American Physical Society’s Division of Fluid Dynamics meeting.