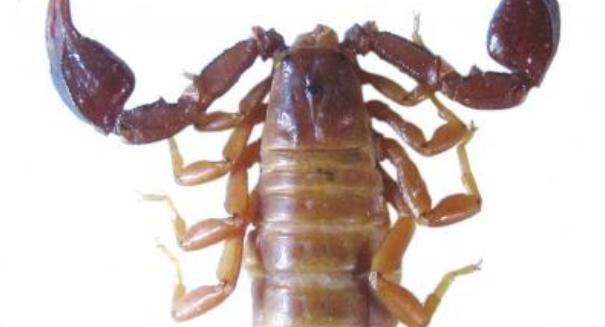 Measuring between two and 2.5 centimeters, the adult representative is pale with darker claws.

A scorpion is the last thing you want to find in your boot when you get up in the morning, but the sting of a newly discovered species of scorpion, known as Euscorpius lycius, would feel more like a mosquito bite than anything else. Pensoft Publishers reports that the new species hails from the regions of the Muğla and Antalya Provinces in Southwestern Turkey. The discovery of Euscorpius lycius raises the total number of scorpions from this genus found in Turkey to five known species.

Euscorpius is a genus of scorpions, commonly known as tiny wood-scorpions. In fact, the largest representative measures approximately 5 cm long. Found throughout North Africa and across Europe,  Euscorpius scorpions don’t pack a lot of bite. According to experts, their poison has about the same effect as a mosquito bite.

Named after the historical region of Ancient Lycia, Euscorpius lycius can be spotted cloaked in pine forests, scrabbling around on rocks or sitting on stone garden walls. Euscorpius lycius lives in humid and cool places, especially where moss-covered stones abound.

Measuring between two and 2.5 centimeters, the adult representative is pale with darker claws.

“A total of 26 specimens belonging to the new species were collected from Antalya and Muğla Province, in the south-west of Turkey,” noted lead author Dr. Yağmur in a statement. “Further studies are in progress to understand the quantity and distribution of the different species and populations of the genus Euscorpius in Turkey and their relationship with the Greek populations.”

The study’s results are published in the journal Zookeys.