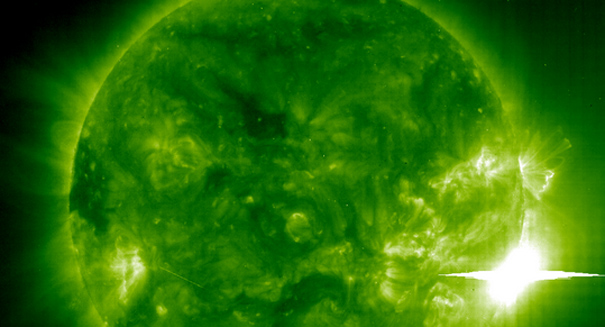 So what is a solar flare? What astronomers see is a sudden brightening just over the sun’s surface; they believe that sudden brightening is a huge blast of energy released from the sun. Solar flares are classified based on how many watts of energy per meter square they release when they give off. A is the smallest at 10-7 and X is the fifth and greatest with an energy output greater than 10-4 watts.

NASA’s Solar Dynamics Observatory has been following the sun and the recent barrage of solar flares (the last one before these was on March 14, 2013) it’s been emitting. The increase in high-class solar flares erupting from the sun suggest to NASA scientists that the sun is nearing its “solar maximum” phase. Solar storms occur on an 11-year cycle, and during the “solar maximum,” the sun experiences an increase in sunspot activity.

Scientists had thought that the peak had occurred already this year to the Solar Cycle 24, which would have made this cycle the weakest observed yet. However, due to recent activity, the researchers are starting to think the sun is experiencing a double peak, with the weaker peak occurring early in 2003 and the second happening in late 2013 or early 2014.

Scientists have noticed three in the last week, including the two X-class flares that erupted back to back. “We’re just on the other side of the top of the sine wave right now,” says Dr. Art Poland, an astrophysicist with George Mason University. “You get your biggest flares and biggest magnetic disruptions on the way down.”

The two X-class flares seen last week were rated an intensity of X1 and X3 (which is triple the intensity of X1). The largest solar flare recorded was an X45 back in November 2003. These solar flares, though powerful, are too far away to penetrate Earth’s atmosphere and hurt humans. They can, however, disrupt power grids, communication systems and even satellites.

Once the sun reaches its solar cycle peak, another interesting phenomenon will happen: the flipping of the sun’s magnetic fields. Researchers from Stanford University had predicted back in August the sun’s poles will be reversed.