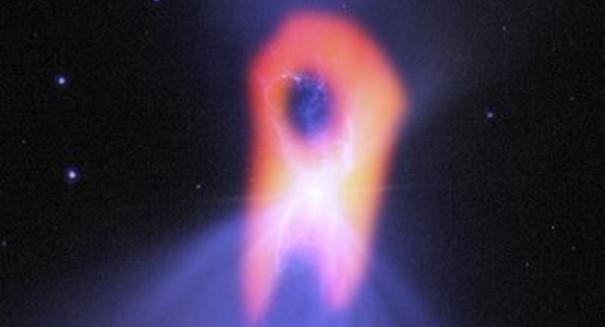 The Boomerang Nebula, positioned approximately 5,000 light-years away in the constellation Centaurus, is a somewhat youthful example of a space object called a planetary nebula.

According to a news release from the National Radio Astronomy Observatory, astronomers have spotted the ghostly shape of the Boomerang Nebula, also known as the “coldest place in the universe” (minus 458 degrees Fahrenheit), utilizing the Atacama Large Millimeter/submillimeter Array (ALMA) telescope.

First spotted with ground-based telescopes, this space object looked lopsided. Later information from NASA’s Hubble Space Telescope showed a bow-tie-like structure. The new ALMA observations, however, show that the Hubble photo reveals only part of the Boomerang Nebula’s story, and the twin lobes observed in that photo may actually be an illusion created by the light as viewed at visible wavelengths.

“This ultra-cold object is extremely intriguing and we’re learning much more about its true nature with ALMA,” noted lead author Raghvendra Sahai, a researcher at the space agency’s Jet Propulsion Laboratory, in a statement. “What seemed like a double lobe, or ‘boomerang’ shape, from Earth-based optical telescopes, is actually a much broader structure that is expanding rapidly into space.”

The Boomerang Nebula, positioned approximately 5,000 light-years away in the constellation Centaurus, is a somewhat youthful example of a space object called a planetary nebula. Planetary nebulae are really the end-of-life phases of stars like our Sun that have shed their outer layers. White dwarf stars at their center give off intense ultraviolet radiation that forces the gas in the nebulae to glow and radiate light in stunning colors.

The discharge of gas from this particular star is growing quickly and cooling itself in the process. The astronomers were able to determine the temperature of the gas in the nebula by observing how it absorbed the cosmic microwave background radiation, which has a temperature of minus 455 degrees Fahrenheit.

“When astronomers looked at this object in 2003 with Hubble, they saw a very classic ‘hourglass’ shape,” said Sahai. “Many planetary nebulae have this same double-lobe appearance, which is the result of streams of high-speed gas being jettisoned from the star. The jets then excavate holes in a surrounding cloud of gas that was ejected by the star even earlier in its lifetime as a red giant.”

Single-dish millimeter wavelength telescopes, however, failed to identify the narrow waist observed by Hubble. Instead, they discovered a more uniform and almost spherical outflow of material.

ALMA helped the astronomers resolve this inconsistency. By examining the dissemination of carbon monoxide molecules, which glow brilliantly at millimeter wavelengths, the astronomers were able to identify the double-lob structure that is observed in the Hubble photo, but only in the inner regions of the Boomerang Nebula. Further out, they actually spotted a more elongated cloud of cold gas that is practically round.

The astronomers also found a dense lane of millimeter-sized dust grains encircling the star, which clarifies why this outer cloud has an hourglass shape in visible light. The dust grains have produced a mask that shades a region of the central star and helps its light to flow out only in narrow but opposite directions in the cloud, granting it an hourglass appearance.

“This is important for the understanding of how stars die and become planetary nebulae,” noted Sahai. “Using ALMA, we were quite literally and figuratively able to shed new light on the death throes of a Sun-like star.”

The study’s results are described in greater detail in Astrophysical Journal.