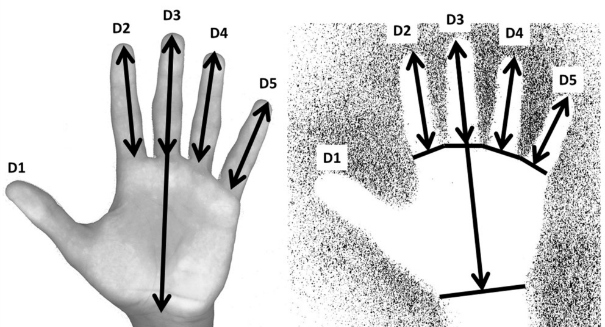 The first step in the process revealed that only 10 percent of the handprints on cave walls in Spain and France were placed by adult males.

According to a news release from Penn State University, a Penn State anthropologist can identify the sex of some of the people who placed their handprints on rocks and cave walls. Interestingly, he found that the first cave painters may have been mostly women.

The theory has been that hand prints were generated by men because other images on cave walls were frequently hunting scenes. The tinier handprints were believed to be young boys.

Dean Snow, emeritus professor of anthropology, studied the research of John Manning, a British biologist who had previously attempted to identify sex, sexual preference and susceptibility to heart disease by examining the relationships of differing hand measurements. Snow thought that he could learn more about handprints left in cave locations in France and Spain by using this technique.

“Manning probably went way beyond what the data could infer, but the basic observation that men and women have differing finger ratios was interesting,” Snow noted in a statement. “I thought here was a neat little one off science problem that can be solved by applications of archaeological science.”

When the anthropologist spotted a handprint in a book on Upper Paleolithic art, he concluded that the image was female. A cursory study of five other images determined that two thirds were female.

Snow discovered that he required a two-step process for the modern hands to successfully make a distinction between men and women. He first determined the overall size of the hand utilizing five dissimilar measurements. This divided the adult male hands from the rest. Snow discovered that step one was 79 percent successful in identifying gender, but adolescent males were categorized as female.

Step two compares the ratios of the index fingers to the ring finger and the index finger to the pinky to differentiate between adolescent males and females. The success rate for the known hands was only 60 percent.

“I thought the fact that we had so much overlap in the modern world would make it impossible to determine the sex of the ancient handprints,” Snow posited. “But, old hands all fall at or beyond the extremes of the modern populations. Sexual dimorphism was greater then than it is now.”

“By just eyeballing, I’m more accurate with the modern hands than the formulas I developed,” Snow added. “There are some variables there that I’m not aware of yet. The algorithms are pretty good, but they could be better.”

The study’s findings are described in greater detail in American Antiquity.