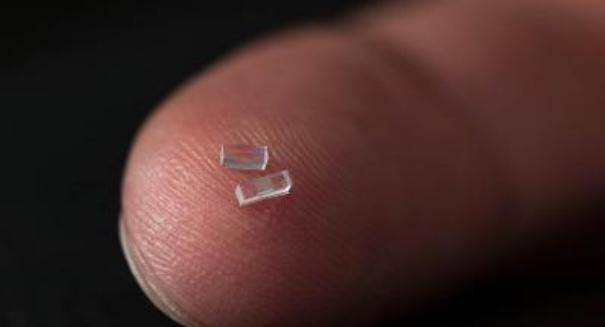 According to a news release from the Department of Energy’s SLAC National Accelerator Laboratory, scientists have demonstrated an “accelerator on a chip.” This technology could lead to smaller, cheaper tools for science and medicine.

Scientists utilized a laser to accelerate electrons at a rate 10 times higher than normal technology in a nanostructured glass chip tinier than a grain of rice.

“We still have a number of challenges before this technology becomes practical for real-world use, but eventually it would substantially reduce the size and cost of future high-energy particle colliders for exploring the world of fundamental particles and forces,” said experiment leader Joel England, an SLAC physicist, in a statement. “It could also help enable compact accelerators and X-ray devices for security scanning, medical therapy and imaging, and research in biology and materials science.”

According to scientists, the miniature accelerator could equal the accelerating power of SLAC’s 2-mile-long linear accelerator in just 100 feet if operating at its maximum potential. Additionally, the “accelerator on a chip” could achieve a million more electron pulses per second.

The first trial reached an acceleration gradient of 300 million electronvolts per meter, which is approximately 10 times the acceleration offered by the current SLAC linear accelerator.

“Our ultimate goal for this structure is 1 billion electronvolts per meter, and we’re already one-third of the way in our first experiment,” said principal investigator Robert Byer of Stanford University.

The utilization of lasers to drive the accelerator fits the researchers’ desire to find a cheaper alternative to the use of microwaves to increase the energy of electrons.

In the laser method, electrons are first sped up to near light-speed in a normal accelerator. Then they are focused into a small, half-micron-high channel within a fused silica glass chip just half a millimeter long. The half-micron-high channel has been patterned with accurately distributed nanoscale ridges. Infrared laser light illuminating on the pattern creates electrical fields that interface with the electrons in the channel to increase their energy.

The study’s findings are described in detail in the journal Nature.