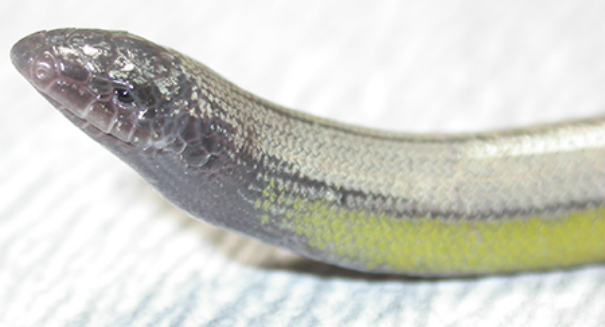 The names for the newly discovered species were selected to honor California natural historians whose work impacted the study of the state's vertebrate biodiversity.

According to a news release from California State University-Fullerton, four new species of legless lizards have been discovered in California.

“This is an exciting discovery to science,” said James Parham, assistant professor of geological sciences and faculty curator of paleontology at the John D. Cooper Archaeological and Paleontological Center, in a statement.

“This is the first time that so many new species of lizards have been described from California at one time, making this an unprecedented herpetological discovery for the state,” Parham added. “These discoveries illustrate how new species can still be discovered, despite being found in some heavily compromised urban areas.”

According to Parham, California was thought to have only one species of legless lizards prior to their findings. The new species have silver or purple bellies, while the previously known species have distinct yellow bellies. The number of scales or vertebrae also can differentiate between some.

“The main differences among the new species are determined from their DNA, which shows that these species have been separated from each other for millions of years,” Parham noted.

The names for the newly discovered species were selected to honor California natural historians whose work impacted the study of the state’s vertebrate biodiversity. The four new species of legless lizards are: Anniella alexanderae, Anniella campi, Anniella grinnelli and Anniella stebbinsi.

The importance of the new species has conservation ramifications since a lot of their habitat has been ruined, or is endangered, because of urbanization, agricultural applications, or oil and gas surveys. According to the news release, the California Department of Fish and Wildlife thinks of the lizards as a “species of of special concern.”

The legless lizards look like tiny snakes and are eight to twelve inches long and about as wide as a pen. Anniella (the scientific name of the legless lizards) are the only legless lizards in the western United States. Through evolution, the progenitor of Anniella lost its legs because of digging and residing in the sand. Unlike snakes, the legless lizards have eyelids and external ear openings. They also lack a forked tongue. Citing the Natural History Museum of Los Angeles County, CNN says that the best way to tell the difference between a legless lizard and a snake is to stare it in the eyes. If it blinks, it’s a lizard.

According to Parham, the legless lizards reside under loose soil and sand in areas ranging from Southern California to the San Joaquin Valley, the eastern Sierra Nevada and the Bay Area.

Due to their living environment, the researchers utilized unique search techniques to locate them, including deploying numerous plywood or cardboard cover boards to construct a research habitat.

“Since these species are new to science and because they are so hard to find, and their status and geographic ranges are not well defined, much more work is needed to see where these species exist and what their conservation status should be,” Parham posited.

The study’s findings are published in the journal Breviora.