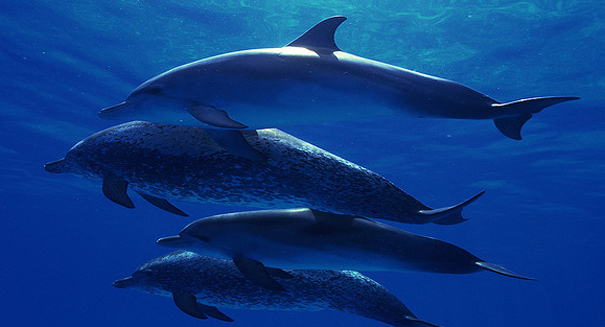 It’s a small world after all—at least from an evolutionary standpoint. A new study from Queen Mary University of London and published in Nature has found that bats and dolphins, though virtually unrelated species, independently underwent the same evolutionary process to develop the highly specialized biological system echolocation.

“We had expected to find identical changes in maybe a dozen or so genes but to see [changes in] nearly 200 is incredible,” said lead author Joe Parker in a statement. “We know natural selection is a potent driver of gene sequence evolution, but identifying so many examples where it produces nearly identical results in the genetic sequences of totally unrelated animals is astonishing.”

Biologists have argued how different animal species independently developed echolocation—the sonar-type mechanism where animals emit and listen to their own calls or clicks bouncing back from objects to form an image in front of them and to locate prey. Scientists had found far fewer examples of genes clearly involved in convergent evolution of traits such as echolocation because no one had looked across the entire genome before.

The study released yesterday did just that. The team of biologists led by Joe Parker and Stephen Rossiter at Queen Mary University of London, used the largest dataset ever to look for signs of convergent evolution in 2,326 genes shared by 22 mammals, including six bats, the bottlenose dolphin, horses, dogs and humans. “This study is the first to examine genome-wide convergence at the level of protein sequences and connect it very explicitly to convergent phenotypes, which is very nice,” says evolutionary biologist Antonis Rokas at Vanderbilt University in Nashville, Tenn.

Convergent evolution explains the idea of different species evolving similar features, the wing being the most common example. Birds, bats and insects all evolved the ability to fly independently from one another, converging on a single useful trait. The biology team found a ‘convergence signature’ in almost 200 regions of the genomes. They discovered that the genes responsible for hearing and especially sight were most likely to have evolved similarly across species. The next challenge for the team will be to determine how many of the 200 genes are actually involved in echolocation.

“These results could be the tip of the iceberg,” senior author Stephen Rossiter said in a statement. “As the genomes of more species are sequenced and studied, we may well see other striking cases of convergent adaptations being driven by identical genetic changes.”