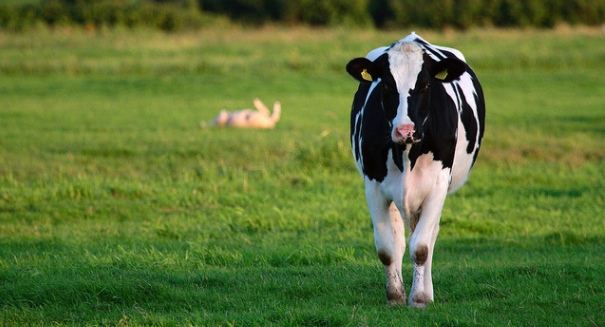 It has long been known that cattle contribute to global warming by emitting large amounts of greenhouse gases via their burps and farts. However, researchers from the University of Helsinki have discovered that beetles living in cow dung might actually reduce methane emissions.

Agriculture is considered one of the biggest sources of the anthropogenic greenhouse gasses responsible for global warming. The farming of cattle for both meat and milk is a primary source of methane, which has a potent effect on global warming. A lot of the methane comes from the guts of the cattle, but some escapes via cow dung left in pastures.

Atte Penttila undertook the study for his Masters and explains, “Cow pats offer a prime food for a large number of organisms. In fact, there are probably as many beetle species living in dung as there are bird species on this planet.”

Most of the dung beetles living in Northern Europe spend a majority of their lives residing inside cow dung. This is because they both feed on and live in the feces.

Penttila adds, “We believe that these beetles exert much of their impact by simply digging around in the dung. Methane is primarily born under anaerobic conditions, and the tunneling by beetles seems to aerate the pats. This will have a major impact on how carbon escapes from cow pats into the atmosphere.”

Tomas Roslin, head researcher, explains that the carbon dioxide in the plants the cattle eat is converted to methane under anaerobic conditions. Cow dung does not contain much oxygen, but the tunneling and digging done by the beetles aerates the cow pats, which as a result exposes them to more surface air and reduces the production of methane. Carbon dioxide is still released, but it isn’t nearly as potent as methane.

Roslin says, “If the beetles can keep those methane emissions down, well then we should obviously thank them and make sure to include them in our calculations of overall climatic effects of dairy and beef farming.”

Researchers believe the beetles could have a major impact on how carbon is escaping from cow pastures, but they are also concerned about the sharp decline in several different dung beetle species.

This study is published in the journal PLoS ONE.