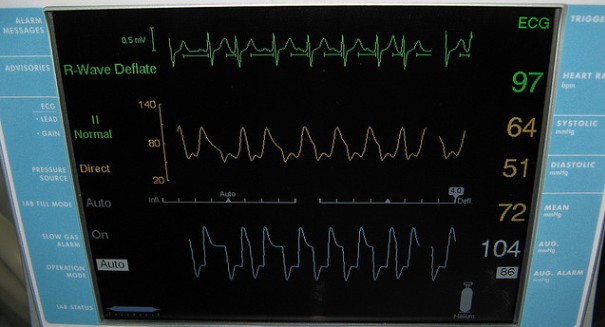 Doctors worked to resuscitate the man, using every tool and medicine available, for 45 minutes before officially declaring him dead.

Tony Yahle, a 37-year-old man from Columbus, Ohio, was at home on August 5 when his wife noticed that he was no longer breathing, reports News Channel 4.  His wife, Melissa, woke up and knew something was wrong.  According to the Christian Post, Melissa is a nurse.  Unable to wake Tony, she called emergency services and performed CPR until paramedics arrived.

After being rushed to the hospital, Tony’s condition briefly appeared to stabilize.  Kettering Medical Center, the hospital to which Tony was taken, had a cardiologist that examined Tony’s arteries, reports UPI.  The cardiologist, Dr. Raja Nazir, determined that they looked clear and that, until Tony went into cardiac arrest, he looked good.  Then, his heart stopped completely.  Doctors worked to resuscitate Tony, using every tool and medicine available, for 45 minutes before officially declaring him dead.

When doctors went to inform the family that Tony was dead, his 17-year-old son Lawrence rushed to his father’s room.  In what may have appeared to be hysteria, he shouted at his father’s body that he was not going to die today.  Moments later, Dr. Nazir noticed that Tony had a faint heartbeat again.  His heart was beating once or twice a minute.  Seeing this new activity, Dr. Nazir had the medical team work again to revive Tony.  Doctors still do not know what caused Tony’s medical emergency, nor do they understand how he came back to life.

It is not the first time a person has been declared dead and still survived.  ABC Local News tells the story of Amy Moore, who went into cardiac arrest at the age of 38.  Though pronounced dead, she was brought back to life by doctors.  Her heart had stopped beating for 15 minutes, but seeing a chance to save her, they induced hypothermia to minimize brain damage.  After freezing and unfreezing her, Moore was miraculously able to walk and enjoy time with her family again in days.

Another UPI article tells a story that belongs in a zombie movie.  Mourners at a funeral in Zimbabwe noticed that the 34-year-old man they have come to pay their respects to was not resting in peace.  Rather, his legs were twitching.  After rushing him to the hospital, they found the man was still alive.

Finally, Colleen Burns went into a New York hospital in 2009 and almost did not leave, according to the New York Daily News.  Burns did not die, but doctors mistakenly declared her brain dead and she woke up just moments before doctors were about to harvest her organs.