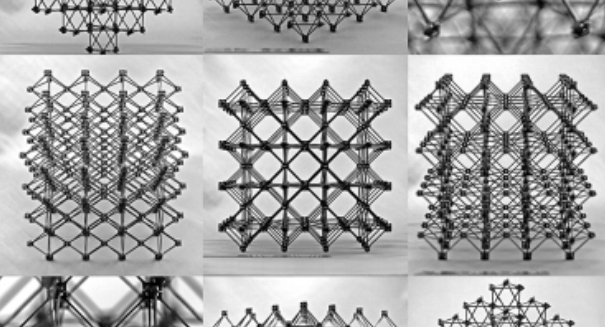 A robotic will likely move very slowly over the surface of a forming structure, snapping pieces to the existing structure.

According to MITnews, researchers have created a lightweight structure whose small blocks can be assembled just like LEGO bricks. According to MIT researchers, the novel material could change the construction of large structures, like airplanes and spacecraft.

Neil Gershenfeld, director of MIT’s Center for Bits and Atoms, told the MITnews office that the structure is a lot like chainmail. The parts create a structure that is 10 times harder for a given weight than current ultralight materials. In addition to being extremely durable, this new structure can also be dismantled and rebuilt easily.

“The resulting cellular composite materials can respond as an elastic solid with an extremely large measured modulus for an ultralight material (12.3 megapascals at a density of 7.2 mg per cubic centimeter),” noted the researchers.

According to MITnews, the small blocks can be mass-produced. In fact, Gershenfeld and postdoc Kenneth Cheung are creating a robotic system to turn them into airplane parts and other components of large structures. A robot will likely move very slowly over the surface of a forming structure, snapping pieces to the existing structure.

With conventional composites each piece is made as a continuous unit. Thus, making big structures demands big factories where fibers and resins can be wound and parts heat-cured as a whole, decreasing the number of disconnected pieces that have to be joined in final assembly. For example, Boeing’s suppliers had to construct giant facilities to manufacture parts for the company’s airplanes.

“These materials offer a hierarchical decomposition in modeling, with bulk properties that can be predicted from component measurements, and deformation modes that can be determined by the placement of part types,” added the researchers.

According to the researchers, the novel approach allows a lot less material, pound for pound, to handle a given weight. This technique could lower the costs of construction and assembly, while also giving engineers more design flexibility.

“Because site locations are locally constrained, structures can be produced in a relative assembly process that merges desirable features of fiber composites, cellular materials, and additive manufacturing,” said the researchers.

According to MITnews, Gershenfeld and Cheung recognized that 3-D printing was an unrealistic technique for producing the structures needed for airplane parts and other modes of transportation. According to Gershenfeld, their novel approach “satisfies the spirit of the question, but it’s assembled rather than printed.”

Traditional composite manufacturing has another major downside: the joints between big components are usually where structural issues begin. While these new structures are constructed by linking numerous small composite fiber loops, the researchers demonstrate that they act like an elastic solid. This is due to the fact that forces are conducted through the structures inside the pieces and apportioned across the lattice structure.

This ultralight composite material also has the benefit of failing only incrementally, as opposed to the large scale failings of traditional composite materials. “It’s a massively redundant system,” posited Gershenfeld.

According to the researchers, the individual components of the composite materials are constructed to be heavy-duty in the directions of forces that might be applied in normal use, and need pressure in a different direction to be released.

This novel technique is already receiving positive feedback from the airplane industry. This new approach “is really disruptive,” said Alain Fontaine, who works for Airbus. “It opens interesting opportunities in the way to design and manufacture aerostructures.”

Did you play with LEGO products as a child? What was the biggest structure you ever assembled? Can you imagine building a real airplane by snapping together small pieces? Share your thoughts in the comments section.