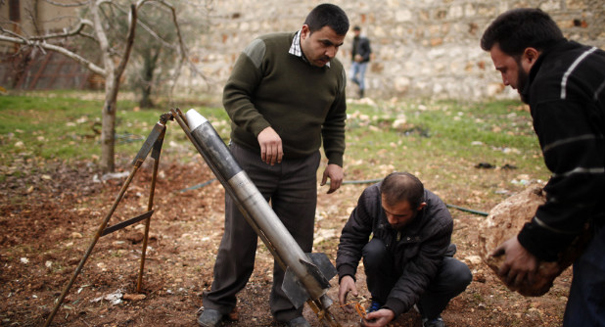 The U.N. human rights office released an estimate of Syrian casualties that brings the harsh realities of the nation’s civil war into sharp perspective. 60,000 civilians, soldiers, and rebels have suffered violent deaths in the country in just over 21 months.

Reports suggest that recent months have proved to be the conflict’s deadliest thus far, with the pace of killing accelerating over time.

Why the dramatic increase in killings? As the Syrian rebels have organized into a larger and more well equipped fighting force, confrontations with President Bashir Assad’s military have resulted in greater destruction and higher casualties.

Mr. Assad’s military power is largely concentrated in air capabilities currently lacked by the opposition. Accordingly, the rebels have adopted a strategy of launching deadly attacks on government airports as they push toward Mr. Assad’s stronghold in Damascus.

In the past few weeks rebels have clashed with government forces inside the Mannagh military airport near the Turkish border, along with the Aleppo international airport and nearby Nerab military airport, halting air traffic for several days.

The government has responded with daily airstrikes on rebel-controlled areas around the capital, using military jets stationed in bases to the south beyond the reach of rebel forces. Human rights groups and anti-regime activists say Assad’s forces make little effort to avoid targeting civilians when bombing rebel areas.

One recent video shows the gruesome aftermath of a fighter jet missile hitting a gas station in the suburb of Mleiha. Incinerated victims—one still astride a motorcycle—confront the viewer while a voice off-camera screams, “He’s burning! The guy is burning!”

“The number of casualties is much higher than we expected, and is truly shocking,” said U.N. High Commissioner for Human Rights Navi Pillay. Other activist groups have quoted closer to 45,000 casualties, including the UK-based Syrian Observatory for Human Rights.

Mrs. Pillay added that acts by both sides could be considered war crimes, and criticized the government for provoking rebel reprisals by cracking down on peaceful protests.

“The failure of the international community, in particular the Security Council, to take concrete actions to stop the bloodletting shames us all,” Pillay said. “Collectively, we have fiddled at the edges while Syria burns.”

The U.S. and many European and Arab nations have called for Assad to step down, with crippling international sanctions contributing to the steady erosion of Assad’s power. Meanwhile Russia, China and Iran tacitly support the brutal regime by opposing foreign interference in Syria’s internal affairs.

To put the abstract figure of 60,000 dead in perspective, the Associated Press estimates a total of 110,600 violent deaths resulting from the bloody Iraq war over a six-year period from 2003-2009. Casualties in Syria appear to have now reached more than half that number in less than a third of the time.

Left to its own devices, the Syrian civil war continues to claim lives, and its death toll is likely even higher than 60,000. Incomplete reports were excluded, and many killings may not have been documented.

“There are many names not on the list for people who were quietly shot in the woods,” said Pillay’s spokesman Rupert Colville.

The province of Homs experienced the most killings, followed by the Damascus suburbs, Idlib, Aleppo, Daraa and Hama. At least three-fourths of the victims were male.

Mrs. Pillay warned about the continued violence that will almost certainly follow Syria’s divisive civil war. “We must not compound the existing disaster by failing to prepare for the inevitable — and very dangerous — instability that will occur when the conflict ends,” she said.

According to the U.N. refugee agency UNHCR, in December about 84,000 people fled from Syria into neighbors Turkey, Jordan, Lebanon and Iraq, with countless thousands more displaced within the country itself.

International economic interests are responding to Syria’s unstable climate and exiting the country, further weakening the national economy and the Assad regime. Most recently, the Manila-based International Container Terminal Services Inc. said it would withdraw from Syria’s largest port at Tartus, citing an “untenable, hostile and dangerous business environment.”

In addition, early on Wednesday groups attacked the military airport of Taftanas in the northwestern province of Idlib, local al-Ekhbaria TV said, adding that government troops repulsed the attack and rendered many of the assailants killed or injured.

Arab news TV channels said the clashes at the airport were incessant, adding that the rebels managed to storm the airport.

Meanwhile, on Wednesday it was revealed that American journalist James Foley has been missing within the country for over a month. Mr. Foley was abducted by unidentified gunmen on November 22nd while providing video for Agence France-Press, according to a statement made by his family.

“His captors, whoever they may be, must release him immediately,” said AFP chairman Emmanuel Hoog.

Reporting on Syria has proven hazardous to foreign journalists. Many choose to sneak in with rebels after being denied visas by the government.